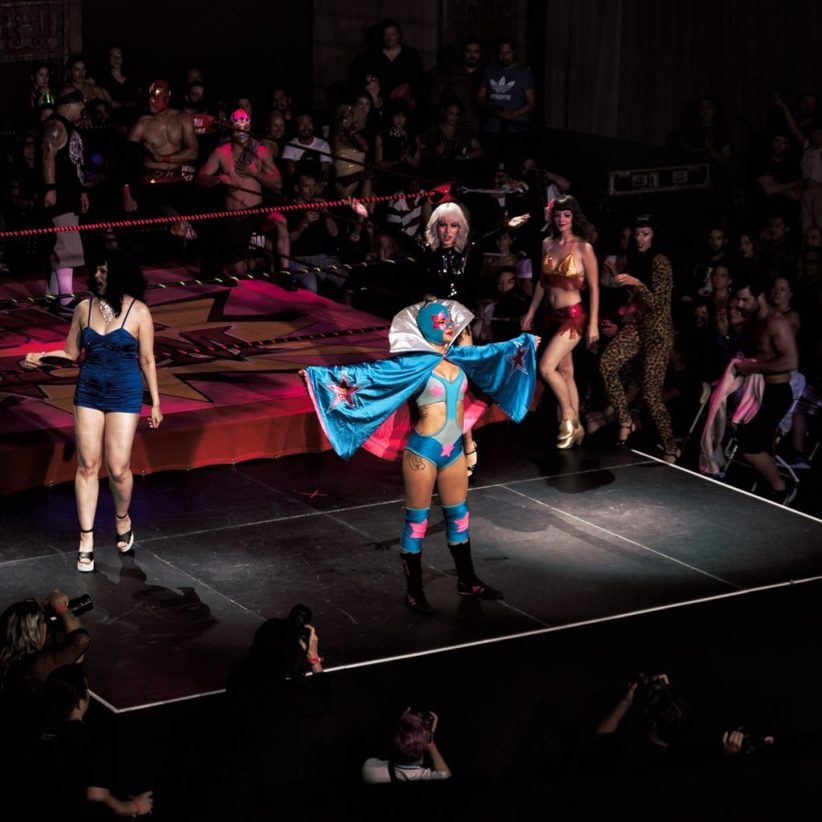 “¡Pinche vieja, vete a la cocina y a chingar a tu madre!” –  A series of insults, of which “Go back to the Kitchen” could be said is the nicest one, hailing down on the Amazonian-like woman dressed in high boots and a tight pink bodysuit and holding on to the ropes of the fighting ring. No, this is not a page out of a Marvel comic, but a typical scene of the ‘battle of the sexes’ taken to Lucha Libre, Mexican professional wrestling and the country’s biggest passion just after by football.

Underneath high-flying manoeuvres in spandex and sequins, there is a more fundamental issue at stake. The fights of the luchadoras, female wrestlers, is like a carnivalesque representation of a real struggle of Mexican women: Against discrimination, against a sexist ‘macho’ culture, and against the many forms of gender violence still commonplace today.

“Machismo has always existed and will exist. But little by little you are gaining your place“, says one of the female fighters in a black cat woman mask, going by the name Princesa Sugehit.

This week, Mexican female wrestlers honoured two important dates: Sunday marked both the anniversary of luchadores being allowed in the ring as well as the International Day for the Elimination of Violence against Women, spearheaded by UN Women, and kicking off 16 days of activism around the world. Fans, feminists or aspiring fighters could witness special fights in a ring mounted between Mexico City’s Museum of Modern Art and the UNAM University – or assist in a self-defence workshop with the luchadoras herself.

However, it seems that the biggest battles of Mexican female wrestlers are traditionally fought far out of the ring. Indeed, female wrestling dates back as early as 1935, but the fights of these first heroines were never without controversy in this conservative male-dominated sports culture.

In 1950, the criticism culminated in a law that forbids female fighters to compete in Mexico City, effectively banning luchadoras from the most important venues of the country. The law was finally lifted in 1986, but it was only in 2005 when a proper squad of female gladiators re-entered the top league in the iconic Arena Mexico. Of the 200 fighters form part of the Mexico’s wrestling promotion authority,  CMLL, only about 10% are female – a core of pioneers and rebels that made it to the professional league in spite of the many obstacles.

Luchadora judged “unfit” as a mother

“I grew up in a dangerous city”, tells female fighter Luna Mágica in the documentary ‘Luchadora’.  “There was a lot of crime because of the lack of jobs. So I had this mentality since I was a child: I need to defend myself”.

Today, when she strips down from her magic show character, she is a single mother living in Mexico City. Despite the professional wrestling status she reached, it is not easy to manage on her salary, neither to divide her time between a challenging job and her little daughter. “I  struggle in the ring and struggle at home”, she says.

And even her success in her professional life can never fully console her from the fact that she has not seen her first-born son in years: Her ex-husband filed a lawsuit to take over his custody, claiming that her work as a luchadora would make her “unfit” as a mother.

Besides the deep passion for the sport, the unshakable determination of women like Luna Mágica to continue these difficult battles seem to be fueled by feelings of empowerment, of self-esteem. Stepping into their stylized figures and putting on the colourful masks typical for Mexican wrestling can feel like transforming into a new person, a character that fighters can choose themselves.

Morphing into their luchadora personas, female fighters can break with restrictive gender stereotypes: “We want to demonstrate to the public and to them, the men, that we also have the abilities. That there exist not only them and their strength, but we, women, and our skills. We can carry out a fight and surrender them”, says the female wrestler going by the name Brillo de Luna (Moonlight) in an interview. She frequently fights mixed-sex battles and earned about  70 victories against men.

And the insults? Arguably, in a sport that is as much about what is going on outside the ring as inside it, they are as much part of the battles as the masks, character names and stylized soap-opera plots.  “It means that you are doing your job well, you are de-stressing them, you are provoking them because they are feeling the adrenaline rush of wanting to hit you and take out their frustration by screaming at you”, thinks Moonlight.

One does not have to watch the video of a male fighter screaming “This is how I hit my wife!” after bringing his opponent down with a spectacular high-flying kick to feel uncomfortable how openly sexism is played out in lucha libre.

Yet the more disturbing reality is that the wrestling arena is not pure fiction, but a slightly more cartoonish, exaggerated and stylized version of the actual discourse and beliefs of everyday Mexicans. With this in mind, wearing a sequined cat mask or not, the fight for the rights and respect of Mexican women has certainly not seen its last round yet.

Will the new USMCA trade deal finally be signed at Argentina’s G20?