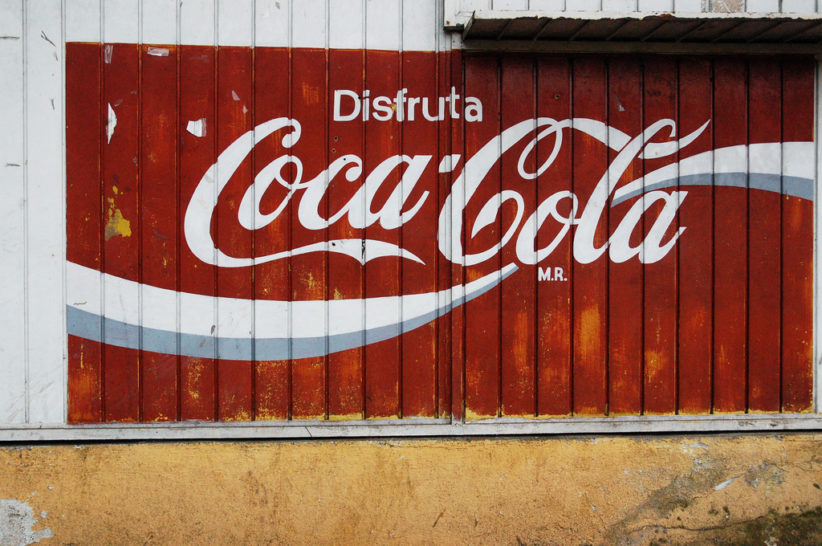 At the St. John the Baptist church in San Juan Chumala, the town’s mostly indigenous residents observe a mixture of Catholic and Tzotzil Maya religious traditions. This bond has spawned the unorthodox belief that burping can purge evil spirits from the soul, which helps explain why for several decades now the church has used Coca-Cola as a replacement for traditional alcohol in religious services.

From the outside, the so-called “Coca-Cola Church” is not particularly eye-catching. The interior decoration, however, is somewhat striking: the walls are lined with Coke bottles, there are no pews, and traditional religious imagery is often complimented by Coca-Cola’s famous red and white logo.

Certainly, the idea of an indigenous community adopting a renowned capitalist symbol for religious purposes may seem abnormal. However, Mexico’s relationship with Coco-Cola is by no means normal. Reports from 2016 revealed that Mexicans consume 180 litres of Coca-Cola per capita each year, making the county one of the largest consumers of the soft drink worldwide. In Chiapas, residents drink on average two litres per day. Coca-Cola’s widespread availability and fizz make it a convenient choice for church-goers hoping to burp themselves clean of any inner demons.

Coca-Cola was not actually introduced to the town until the 1960s, but like in all of Mexico, the soft drink has become a hugely pervasive cultural phenomenon. Coca-Cola’s popularity boom began when the company’s international ad campaign reached Mexico in the late 1960s and 1970s; the company sponsored the 1968 Olympics Games and 1970 World Cup which were held in Mexico. In 1994, Mexico enacted the North American Free Trade Agreement (NAFTA) with Canada and the United States, which greatly reduced the price of importing American products into Mexico. It also allowed companies like Coca-Cola and Pepsi to get a foothold in the country by investing hundreds of millions of dollars into Mexican-owned beverage conglomerates such as Femsa.

Today, Coke is distributed to all corners of the country, sold in ubiquitous convenience stores such as Oxxo, and the company’s logo is plastered is everywhere from billboards in major cities to rural school canteens. In low-income and malnourished communities, the soft drink represents a cheap and convenient source of calories. In states like Chiapas, where the state does not provide consistent access to drinking water, Coke is often more accessible.

Yet astronomical Coke consumption is taking its toll on the population’s health. In Chiapas, there was a 30 percent increase in diabetes between 2013 and 2016 and at the national level, Mexican’s soft drink fetish has helped fuel a soaring diabetes crisis, which kills around 100,000 people and costs the government almost $5 billion every year.

The country introduced a sugar tax in 2014, which in its first two years of implementation led to a sustained reduction in the purchase of taxed beverages. Although it is too early to evaluate the impact the tax has had on the nation’s health crisis, it is clear that diabetes rates remain critically high, suggesting a more holistic approach is required to tackle the issue.

Chihuahua state ramps up the fight against gender violence