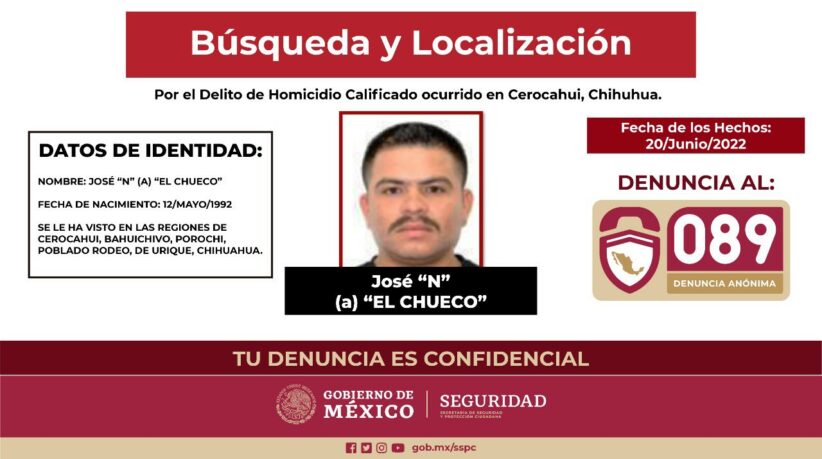 Following a triple murder on the afternoon of June 20 in Urique, Chihuahua, where two priests and a tourism guide were killed, the Mexican government has issued an alert to find José Noriel Portillo Gil, alias “El Chueco,” a known criminal in the region.

According to preliminary reports, Pedro Eliodoro Palma Gutierrez was finishing his shift as a tour guide when an armed subject abducted him alongside two other civilians. Reportedly, Mr. Palma managed to escape to a temple where the Jesuit priests Javier Campos and Joaquin Mora tried to provide shelter to Mr. Palma.

After tracking down the tour guide, the suspected killer opened fire on Mr. Palma as well as both priests; the assassin then reportedly took away the bodies.

On June 22, the Governor of Chihuahua, María Eugenia Campos, reported that the three bodies were retrieved and identified, with the state’s prosecution offering a reward of $5 million pesos ($250,000 USD) for information regarding the whereabouts of Mr. Portillo Gil.

According to authorities, Mr. Portillo was involved in two other incidents on the same day of the triple homicide. The suspected killer reportedly murdered a man identified as “Paul B” before abducting the victim’s brother and an unidentified civilian.

Additionally, witnesses say that Mr. Portillo torched down the house of one of the victims, allegedly over a dispute regarding a baseball match where the team which Mr. Portillo sponsors lost.

Mexico’s Migration department will place checkpoints through the 194 international transit points of the national territory, by air, sea, and land, monitoring all enter-exit movements of the wanted man.

Mr. Portillo is a well-known criminal in the State of Chihuahua and the Sierra Tarahumara, and is an alleged member of the Sinaloa Cartel whose activities have drawn the attention of journalists and government officials.

Some journalistic investigations point out that at 26 years of age, Mr. Portillo became the head of a criminal gang subservient to the Sinaloa Cartel, taking over the planting and harvesting of marijuana and opium in Urique.

Furthermore, state authorities have previously issued arrest warrants for “El Chueco” for the murder of the American tourist Braxton Andrew in 2018 and once again in 2019 for the murder of the activist Cruz Soto Caraveo, with some hinting at a possible coalition between the criminal and government officials.

“We have to investigate because it is unacceptable and also very suspicious that such a person would lead such a normal life because, according to the report of the Chihuahua state prosecutor’s office, he was a sponsor of a baseball team, with the background he already had, and known throughout the region,” said President Andrés Manuel López Obrador at his daily press conference.

Mexico’s Jesuit community denounced Mr. Campos and Mr. Mora’s murders, citing that in a country with over 100,000 disappeared people, the 72 hours the authorities took to find the bodies of their fallen priests is an outstanding effort the vast majority of the populace has no access to.

Pope Francis also dwelled on the murders and violence in Mexico, saying that “violence does not solve problems.”

Quoting the Pope, Mr. López Obrador defended his administration’s security strategy and criticized his “conservative” political opposition, which finds fault in the current administration of the current violent state of the country.

“So, now we are addressing the causes, and of course, it takes time, because with the deep crisis and above all with the loss of values, families disintegrated, the social fabric was affected, and people wanted to assert that what was important was material, money,” said the president.