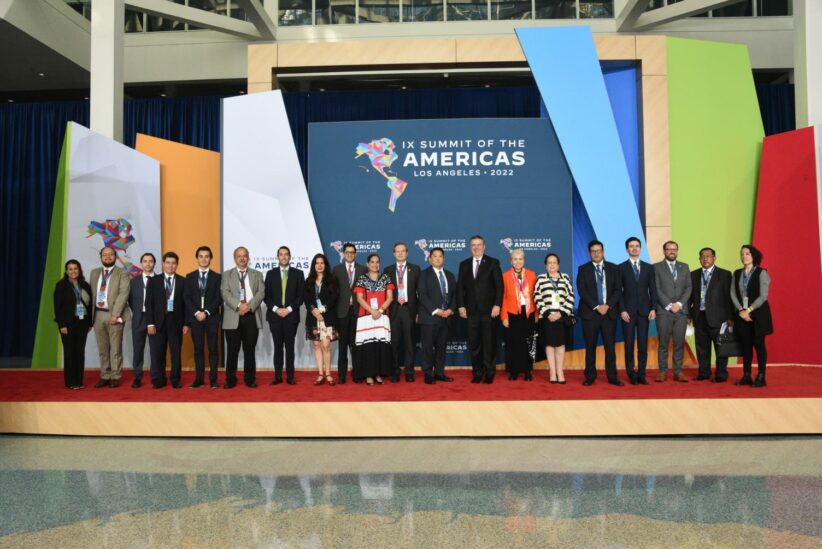 In conjunction with the United States government, Mexico will deepen efforts to attend to the root causes of migration from northern Central America and Mexico’s south while revamping policies to protect Mexican migrants living in the U.S.

During the IX Americas Summit hosted in Los Angeles, California, Mexico, its neighbor to the north and 18 other countries from Latin America and the Caribbean adopted the “Los Angeles Declaration on Migration and Protection,” a framework to ensure safe, orderly, and regular migration.

Mexico’s Foreign Ministry gave a briefing on the nature of the joint efforts, which will attend to Mexican workers in the U.S. and ensure the protection of minors in transit between the two countries.

“The Government of Mexico reiterates the importance of addressing the structural causes of migration in order to provide economical alternatives for migrants to assert their right to remain in their communities of origin.”

The governments of Mexico and the United States will work on a ‘Memorandum of Understanding’ to strengthen visa programs and the defense of labor rights of Mexican nationals working in the U.S.

The program will rely on strengthening hiring programs driven by temporary agricultural and non-agricultural visas, focusing on workers from Mexico’s southern states. In addition, the process is set to be an ethical recruitment program that will look after the human and labor rights of the workers.

Furthermore, an additional task force working with United Nations agencies will design and implement new measures to protect the rights of minors moving between Mexico and the U.S.

In addition, Mexico has pledged to launch a labor program involving Guatemala, incorporating 15,000 to 20,000 Guatemalan nationals into Mexico every year. The project will look to expand to Honduras and El Salvador in the near future.

Mexico will also double the number of working permits available for citizens from Guatemala and Belize to work in Mexico’s southern regions, from 10,000 to 20,000.

Both programs will be carried out with the help of the United States Agency for International Development (USAID), which will help to pan out the recruitment process and follow through on visa applications from northern Central America.

Finally, Mexico will seek to facilitate employment opportunities for 20,000 resettled and integrated refugees over the next three years, starting in 2022.

Mexican President Andrés Manuel López Obrador has pushed the United States to work for more assertive measures to curb the increasing migration flows, in some instances even criticizing an apparent dismissive attitude from the U.S. government.

On June 8, Mr. López Obrador openly denounced the lack of resources spent by the U.S. for migration issues while sending USD $40 billion in weapons and aid to assist Ukraine in the ongoing conflict with Russia.

“There was talk of four billion dollars, and in four, five years, they have not allocated anything; on the other hand, the U.S. legislators, those who talk about being concerned about human rights, authorized…40 billion dollars for arms to Ukraine. Then, how is it possible that the same four billion dollars cannot be authorized to face the fundamental problem of the migratory phenomenon? Why the double discourse?” asked Mr. López Obrador.