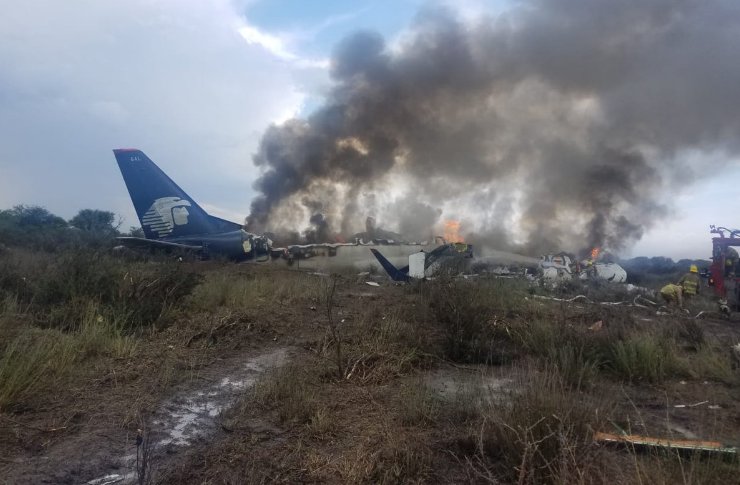 On Tuesday an Aeromexico commercial jet crashed shortly after taking off in Mexico’s north-central state of Durango. Around 85 of the 103 people on-board were treated in different hospitals following the incident, however, Mexican officials confirmed that there had been no fatalities.

The plane’s pilot, Carlos Galván Mayrán, suffered the most serious injury and on Tuesday night underwent spinal surgery, though at a news conference the chief executive of Aeromexico said the pilot’s condition was stable and that his injuries are not believed to be life-threatening. The vast majority of passengers were treated for minor injuries.

“The most important thing is that nobody has lost their life”, Durango state governor José Rosas Aispuro said at a press conference.

Citing preliminary reports, the governor said that the mid-sized jet ― an Embraer ERJ-190AR ― took off in heavy rain and was suddenly affected by shifting winds. The gusts jolted the planed and caused it to plummet “briskly” before its left-wing hit the ground about 300 metres from the runway, tearing off two engines. The crash occurred around 4 p.m local time.

Although the plane was severely damaged, several passengers managed to escape on foot or via the emergency slides, before the wreckage was engulfed by flames. Speaking to the Guardian, passenger Jackeline Flores said that she and her daughter managed to escape through a hole in the fuselage. Another passenger, Rómulo Campuzano, told the New York Times that he felt “two very large impacts” and that the plane was “shaking in a violent way” prior to the crash-landing.

Ambulances arrived at the scene a quarter of an hour after the accident, transporting injured passengers to various nearby hospitals. The airport, which closed for just over three hours to deal with the emergency, re-opened on Tuesday night.

“We deeply regret this accident. The families of all those affected are in our thoughts and in our hearts,” Aeromexico said in a statement on Tuesday.

The Mexican government has created a special commission to investigate the cause of the accident, which has initially attributed to “adverse weather conditions” by Durango’s airport operator ― Grupo Aeroportuario Centro Norte. Both the US National Transportation Safety Board and aircraft manufacturer Embrear will support the investigation, the latter confirming their willingness to support the investigation on Tuesday night and saying that it had already sent technicians to the crash site. Luis Gerardo Fonseca, head of Mexico’s civil aviation agency, said that it may take months to reveal the precise cause of the crash.

The Embrear aircraft was 10 years old and had been previously been used by two other airlines. It was leased to Aeromexico from Republic Airlines in 2014, according to planespotters.com.

Aeromexico is widely regarded as a safe airline and has not had any fatal crashes in the past 10 years.

Third woman murdered after being lured with clothes for newborn