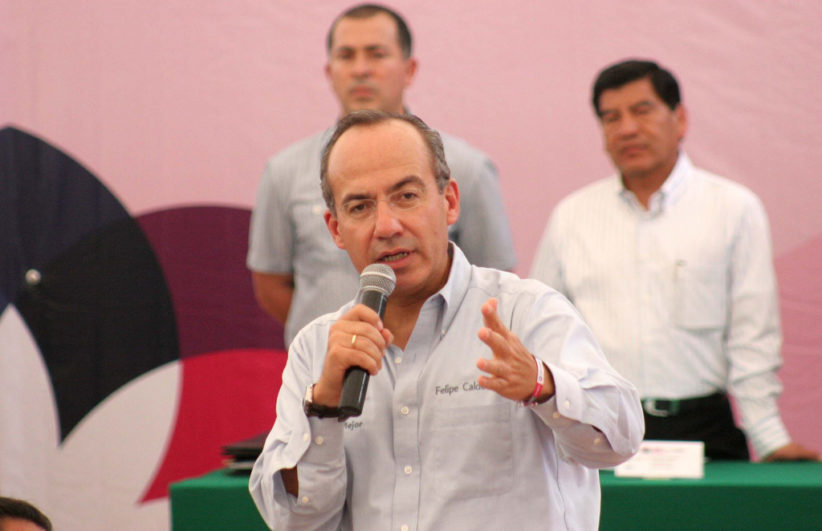 Mexico’s former president Felipe Calderón served the country between 2006 and 2012. Representing the PAN party, his legacy is cemented through the ill-fated war he waged on organised crime and drug cartels across Mexico.

Instead of providing the stability that his country yearned for, the former president’s policies led to increased bloodshed, splinter cartel organisations and the start of spiralling levels of violence that has come to its zenith only recently. This year is expected to take the crown for having Mexico’s highest rate of homicide.

What’s more, many local journalists mark the start of his presidency as coinciding with increased attacks on the freedom of the media, and his neoliberal policies led to the outsourcing of many national companies, placing a vast strain on the country’s economy. It is a combination of his presidency and the subsequent efforts of current leader Enrique Pena Nieto and the PRI that have contributed to the country’s heightened disillusionment with politics and corruption.

This week, however, the former Mexican leader has announced his intentions to create a new political party in a bid to regain the old principles of the National Action Party (PAN).

In an interview he criticized the former ruling party as being controlled by a clique, as well as predicting a dark-looking future in Mexico, suggesting that the country could soon be facing an authoritarian-looking government.

He went on to point out a number of serious issues that his former party undertook. In a bid to distance himself from the party, he suggested that PAN manipulated internal registers, blocked citizen’s abilities to join the party and ensured that a central ring maintained a powerful grip of the party. Essentially denouncing PAN for corruption, although he is set to vote for a new PAN president next week, Calderon is attempting to clear the political space for a new, determined vision and a ‘clean option for Mexico.’

According to Infobae, the mission to create a new conservative party will be hinged on the internal vote for the new PAN president. Calderon floated the idea that the party’s image could be salvaged if Manuel Gómez Morín Martínez del Río wins the position.

His interview continued to highlight the scenario facing many Mexican citizens, who feel like none of the national parties offers what the country needs. Playing on the uncertainty that surrounds the incoming leftist government of Andres Manuel Lopez Obrador, who will assume power next week, he is quoted as painting a Mexican future where the rule of law and legality is seriously brought into question.

There continue to be mixed feelings about the incoming AMLO presidency. As a character, he appears unwavering in the face of corruption, however, many have questioned whether that also applies to the various other people in the Mexican government. Opinions from Mexican citizens vary from uncertainty regarding the ability to untangle decades of corruption in just six years, to hopes that the new president really listens to Mexican workers.