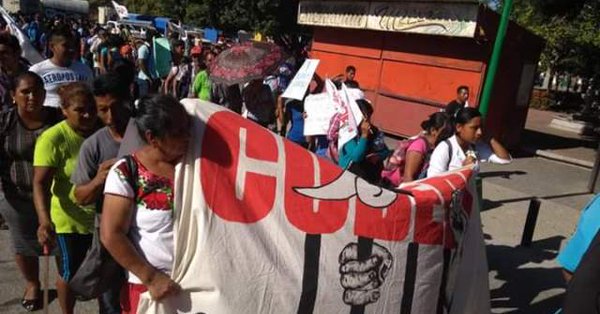 A member of Mexico’s Committee for the Defence of Indigenous Rights (CODEDI) Noel Castillo Aguilar, was killed on October 26 in the state of Oaxaca, southern Mexico. It marks the fifth murder of a human rights activist from the organisation within the country.

Castillo had been an active member of campaigns by the committee to defend land and rivers that are connected to indigenous groups, predominantly in Oaxaca state.

According to Mexican publication Proceso, the attack took place at 1 pm in the municipality of Santiago Astata which was the location that the activist was defending. It has been suggested that the murder of the 44-year-old was related to his work dealing with political activism.

The attack comes just three months after CODEDI co-ordinator, Abraham Hernández González was kidnapped by five people impersonating military personnel before being tortured and killed. Since his death, claims have emerged that police forces were informed there was a risk to his life yet no authorities responded to the messages. Amidst ongoing suggestions that Mexican police forces are failing to protect indigenous activists, the organisation since came forward to announce they have chosen to protect themselves. In a statement from the group, they announced the creation of a community police force that would focus specifically on protecting the rights of the organisation and their campaigns.

It is not just indigenous activists that have faced growing persecution and violence as a result of their work. Earlier this year the National Geographic announced that 2017 had been the deadliest year for land activists around the world, which factors in environmental and indigenous activists. With a total of 207 killings linked to land disputes, rapid increases in agriculture and the demand for farmed goods raise the questions of what governments are doing to protect both citizens and their country’s ecosystem. Of the results, collected from national and international sources by Global Witness, 60% of environmental activist deaths that occurred in 2017 hailed from Latin America. Amongst the countries, Mexico saw a fivefold increase in environmental activism related deaths with a total of 15 and though are just a drop in the ocean in comparison to Mexico’s annual murder rate, the report also claims that the actual results could be a lot higher due to underreporting.

The National Geographic also suggested that up to thirty of last year’s cases had military involvement and 23 were tied to police.

“This crime is clearly of a political nature since he was a member of the local group of CODEDI that is in the legitimate defence of the fight for the defence of its beaches and territory in the region,” the CODEDI organisation has since pointed out about Castillo’s murder. An investigation continues into the death, however, the country’s record-high levels of impunity in relation to killings has made many sceptical of the government and authorities abilities, or intention, of bringing those responsible to justice.