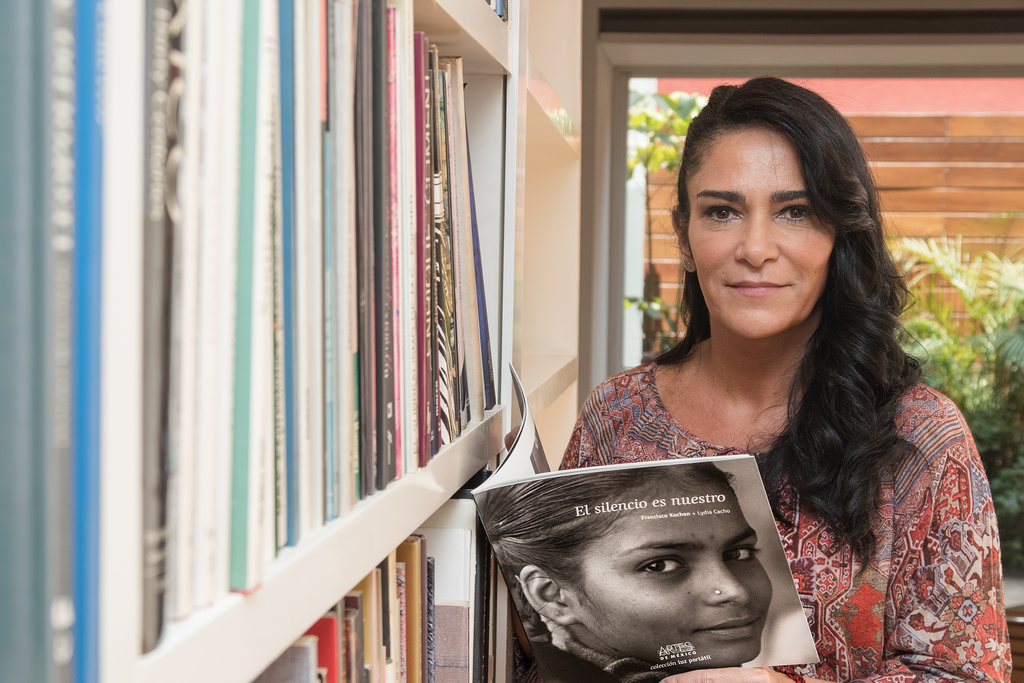 Being a female journalist in Mexico can be dangerous. Being a women’s rights activist even more so. And being perhaps the country’s most famous investigative journalists, focussing on women and child abuse and exposing powerful businessmen to be linked to a paedophilia ring? ‘Somos valientes‘, We are brave, is the title of her latest documentary which details the impact of violence on Mexican children, and it is difficult to find a more applicable adjective when describing the life and work of Lydia Cacho Ribeiro.

Last week, the UN Human Rights Committee made headlines by issuing the first ruling against Mexico on violence – rebuking the state on an incident that Lydia Cacho calls “legal kidnap” by the police. In 2005, following the publication of her book ‘The Demons of Eden’ in which she exposed a child pornography and sex trafficking ring in a Cancún beach resort, she was charged with libel. She was arrested by the police in Cancún and forced into a van for a 20 hour drive north to the city of Puebla. “They had their guns in my mouth and in my genitals,” she later reported the cruel violence she suffered. “At the sea, they debated shooting or drowning me. For maybe an hour they’d put me in the car, pull me out; push me towards the water, then drag me back.”

In her book, Lydia Cacho had revealed how several powerful men had been involved in the pederast-paedophile network. She reported on the ties of businessman José Kamel Nacif Borge, known as El rey de la mezclilla, the ‘King of Denim’, for his jeans factories, and Jean Succar Kuri, the owner of a hotel in Cancún who was to be charged with child pornography. From the cruel arrest and its aftermath, however, it became clear that Mario Marín, the Governor of Puebla who ordered her arrest, was set to protect them.

Lydia Cacho managed to be bailed from prison and fought back in a countersuit for corruption and violation of her human rights. A taped telephone conversation of Marín and Nacif later revealed how the Governor had orchestrated her arrest and detention.  Not surprisingly, the infamous conversation filled with misogyny and despise for Lydia Cacho became a national scandal for Nacif and the man he calls mi góbe precioso, ‘my precious governor”, a nickname the public soon took up in demonstrations for his resignation.

Who is this woman, who risks her life to investigate and expose human rights violations by Mexico’s elite? On her blog, her vita is a brief and matter-of-fact enumeration of some of her achievements that only hint at the fame she has achieved with her courageous work.

Journalist, social activist and writer. Goodwill ambassador for the United Nation Office on Drugs and Crime. Co-founder of the Journalists Network of Mexico, Central America and the Caribbean. Founder center of attention for women and their children victims of violence CIAM Cancún AC. The most awarded journalist in Mexico with 55 international awards.

Fearless, committed and undeterrable: The term ‘superhero’ comes easily into mind, and indeed, among the list of her honors are  World Press International Hero, DoS US World Hero against Human Trafficking and UNANIMA Human Rights Hero Prize.  She does not like the term, however. “There was no way to give up; for the girls and boys who are victims, for my colleagues who have left their skin or their lives in the trenches of investigative journalism. It is not heroism, but ethics and vision of the future”, she states in a recent tweet reacting to the UN Human Rights committee judgement.

Moreover, Lydia Cacho has experienced extreme vulnerability in her life more than once. In 1999, when she was in her mid-thirties, a stranger followed her in the bathroom of a public bus station, assaulted and raped her. She was left to die with serious injuries – as a retaliation for her work as a journalist and feminist, she said later. She did not die. Instead, she carried on, determined to fight for the rights of women, children and other vulnerable groups.

In the same manner, she did not cease to speak out as loudly as she could after the traumatic events of the police arrest following her work on the Cancún paedophile ring. Instead, she wrote a new book – one of the 12 that she published so far- called Memorias de una Infamia, “Memories of an Infamy” that carefully retraces the corruption and right violations of the case.

Her ability to fight back is the reason that she is never perceived a victim, despite the threats, violence and abuse she has suffered. She prefers to call herself a “survivor”:  “The circumstances of my life have offered me a glimpse of the ugliest side of a monster and have put me in a position to reveal its most savage dimensions.”, she said in a 2014 interview.

Lydia Cacho’s own willingness to make huge personal sacrifices for her work – the constant pressure of death threats undoubtedly affecting her personal life and forcing her into exile several times – might make her prone to expect the same from others. However, Edith Encalada Cetina, one of the victims of the Cancún paedophilia ring that features prominently in Cacho’s book, publicly announced that she will vehemently fight against Cacho’s intent to take it to the movie screen. She was quoted in Mexican media last week to consider the publication of her personal life story an “atrocity” towards her person and a violation of her privacy and rights as a victim.

Cacho’s ability to survive offers hope to many in Mexico, a country that faces a crisis of violence and murder of journalists. According to recent estimates, more than 100 media workers have been murdered since 2000, seven alone in 2018.  Lydia Cacho is a voice that refuses to be silenced; and against this background, a voice that Mexico desperately needs.