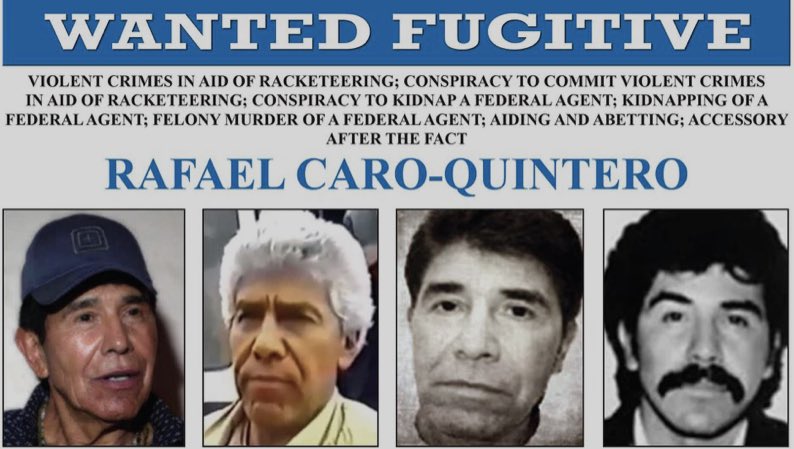 On July 15, authorities captured the founding member of the Guadalajara Cartel in the Sierra of Sinaloa in northern Mexico and he’s reportedly awaiting extradition to the U.S. where he’s wanted for the 1985 murder of U.S. Drug Enforcement Administration (DEA) agent Enrique ‘Kiki’ Camarena.

A principal figure in the formation of Mexico’s drug trafficking cartels, Mexican authorities released Mr. Caro Quintero from prison in 2013 after serving 28 years of a 40-year sentence for the murder of agent Carmena — an issue that has marred U.S.-Mexican relations since.

Since his release, “el narco de narcos” became one of the United States’ most wanted criminals, with the DEA offering up to $20 million for information leading to his capture.

Shortly after his release in August 2013, Mexico’s attorney general’s office reissued an arrest warrant for Mr. Caro-Quintero, and the kingpin had been in hiding until his capture last week.

On Monday, a Mexican judge ruled that there must be a trial in Mexico before the 69-year-old drug trafficker can be extradited to the U.S., a measure reportedly in accordance with the U.S.-Mexico extradition treaty.

The timing of Mr. Caro Quintero’s arrest and the reunion between the two leaders have drawn suspicion surrounding the drug lord’s arrest.

“To me, it’s like a political move. If they wanted to capture him, they probably would have captured him another time,” said Pete Santellano, Mr. Camarena’s former partner.

While the head of the DEA, Anne Milgram, championed Mr. Caro Quintero’s arrest as a joint operation between Mexican authorities and the DEA, Mr. López Obrador has denied any involvement of U.S. authorities.

The murder of Kiki’ Camarena

The rise of the Guadalajara Cartel, founded by Mr. Caro Quintero and Miguel Ángel Félix Gallardo in the late 1970s, drew the attention of the DEA.

The agency sent Mr. Camarena to infiltrate the cartel, which led to a seizure of 1,000 hectares of marijuana on a ranch associated with the traffickers in 1984.

In retaliation, Mr. Caro Quintero allegedly ordered the kidnapping, torture, and murder Mr. Camarena in 1985.
Mr. Caro Quintero was apprehended in April of that year in Costa Rica and sentenced to 40 years in prison in Mexico for drug-related charges and the DEA agent’s homicde. In 2013, Mexican judges released Mr. Caro Quintero on a technicality, citing that Mr. Camarena hadn’t registered as a diplomatic or consular agent in Mexico.

President Luis Echeverría Álvarez: A legacy of human rights abuse and ties to the CIA

US, Canada challenge unfair treatment of Mexico under the USMCA