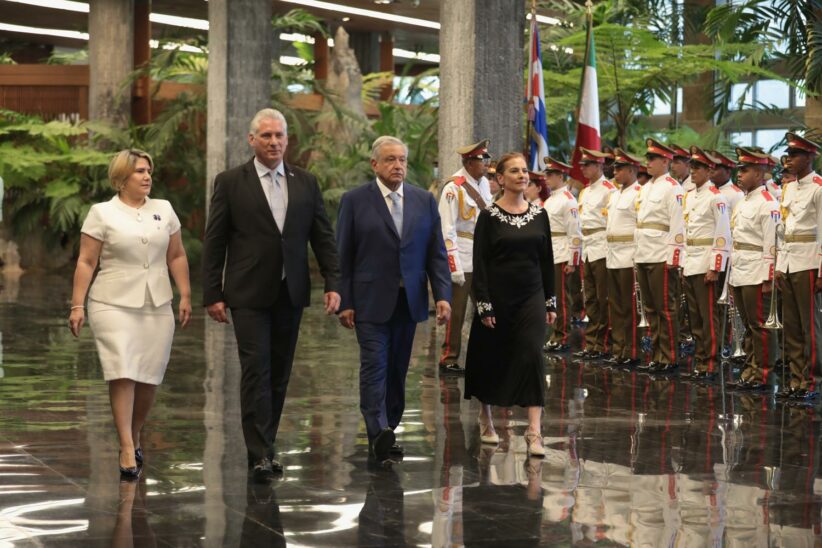 Mexican President Andrés Manuel López Obrador (AMLO) said on Monday that he will speak to organizers of the upcoming Summit of the Americas conference to convince them all countries from the region should be allowed to attend. The president previously said he would not attend the summit in Los Angeles if the United States didn’t invite leaders from Cuba, Nicaragua and Venezuela.

According to Reuters, AMLO said he will meet on Wednesday with a delegation, including U.S. Ambassador to Mexico Ken Salazar, and Christopher Dodd, an organizer of the Summit.

The Summit of the Americas is a regular meeting of heads of state from countries that make up the Organization of American States (OAS). Cuba was originally excluded from the OAS in 1962 following the country’s revolution but was granted participation in 2009 during the administration of President Barack Obama who tried to reestablish relations with the island nation.

In a press conference last week, AMLO said that if all countries weren’t able to attend, Foreign Minister Marcelo Ebrard would be sent as a representative of Mexico, but he himself would not attend as a sign of solidarity with the other leaders.

In his visit to Cuba on May 8, AMLO pledged to his Cuban counterpart, President Manuel Díaz Canel, to insist to President Joe Biden that no countries would be excluded from the upcoming summit. On May 16, it was announced that the Biden administration had agreed to ease some of the Trump-era sanctions against the island.

Although Reuters has reported that official invitations have not been sent out, it is expected that the U.S. will not invite the leaders of leftist governments including Cuba, Nicaragua and Venezuela — a country that had been heavily sanctioned by the United States.

Following AMLO’s remarks last week, Ambassador Salazar reportedly rushed to the National Palace to discuss the president’s comments and assured him that invitations were yet to be sent and no final decision has been made about the countries attending.

The U.S. White House Press Secretary, Jen Psaki, said that “We haven’t made a decision about who will be invited, and no invitations have been issued yet.”

However, Undersecretary of State for the Western Hemisphere, Brian Nichols, said it would be “inconvenient” to invite the leaders of Cuba, Nicaragua, and Venezuela for their “undemocratic” character.

A Long History of U.S. Opposition to Leftist Governments in Latin America

The United States has a long track record of using economic, political and military influence to subvert governments it opposes in Latin America. And much of this is still visible today.

Keeping in line with his predecessor, former President Donald Trump, Mr. Biden has continued to critique the regimes in Cuba, Nicaragua and Venezuela, as well as use economic sanctions against them. Critics, however, say that these sanctions can have a negative impact on the most vulnerable.

For instance, UN human rights expert Alena Douhan issued a report stating that the unilateral sanctions against Venezuela had a “devastating effect” on the people, especially women and children, the elderly, and people with underlying medical conditions.

U.S. officials too have condemned sanctions there. In a letter issued to the Biden administration, Representative Jim McGovern said that “credible sources have consistently found that U.S. sanctions have worsened the humanitarian crisis in the country.”

In Nicaragua, officials have accused the U.S. of intervening and causing dissent amongst its  population, claiming that Washington has been funneling resources disguised as humanitarian aid to finance far-right opposition groups striving for violent regime change.

Cuba’s Foreign Minister Bruno Rodríguez Parrilla accused the U.S. of being behind the SOS Cuba protests in July of 2021, claiming that a private company, ProActivo Miami Inc., received funds from the state of Florida to help undermine the Díaz Canel government.

AMLO’s threat to not attend the summit if all countries are not invited has been met with support from other Latin American leaders.

President Luis Arce from Bolivia, and Honduran President Xiomara Castro, have joined AMLO in saying that they won’t attend the Summit of the Americas if all countries are not invited. (Mrs. Castro’s husband, former President Manuel Zelaya, has accused the U.S. government of being complicit in a 2009 coup that overthrew his regime)

When asked if he thought his comments could spark outrage in the United States, Mr. López Obrador said that “no one has the right to speak on behalf of all America.”

Two female journalists murdered in Mexico, number of killed press rises to 11 so far this year