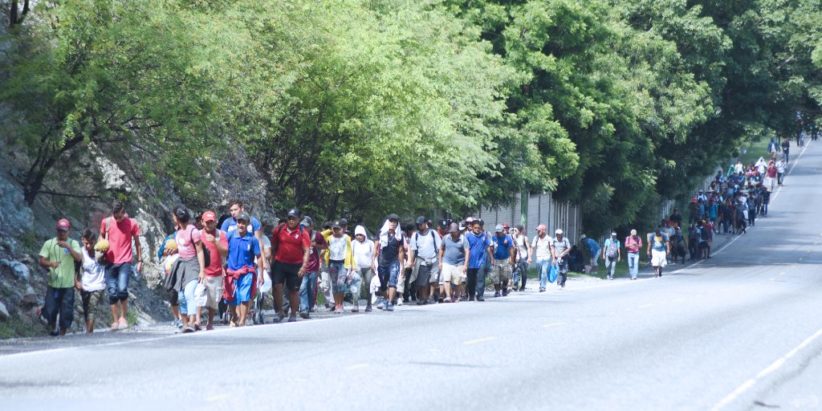 The Honduran migrant caravan continues at a steady pace through Mexico, despite what CNBC has reported as ‘sickness, fear and police harassment’ feeding through the crowds. Though true it may be that some have since turned back whilst others have applied for asylum in Mexico, a considerable number press forward towards the United States border.

Alongside Venezuela’s humanitarian crisis and the heightened violence in Nicaragua that is forcing citizens to leave, high rates of unemployment across Central America have meant that people are choosing to leave the area in swathes. Many state that violence and poverty are the main reasons they are being forced to leave their countries.

The Migrant Caravan’s relentless strength in face of a seemingly near-impossible journey has captivated the headlines of the world’s media in both a positive and negative light, however in the era of ‘fake news,’ it has also become necessary to triple check every allegation that is being made.

Here we debunk come of the more vicious claims, with some help from the reporters who are actually following the caravan.

‘MS-13 and Middle Eastern migrants are hiding within the migrant caravan.’

Hello from southern Mexico, where no one covering the caravan has met anyone from the Middle East, and there is no way to discern anyone’s criminal history. https://t.co/wKoCfhY0mO

According to statistics, in Honduras people following religions apart from Christianity make-up 3% of the total population. It wasn’t only journalists on the ground that immediately pulled the President of the United States up for his claim, but also Trump himself. When asked to display proof to a journalist about the Middle Eastern migrants, he stated ‘there’s no proof of anything.’

‘The Mexican Government is not stopping the caravan.’

Agents now tell me these are people understand where they’re going and that they could be in this fairground/detention center for approx 45 days as their asylum case is reviewed. Migrants still on buses. I haven’t been able to talk to them yet

Unknown to many of the migrants entering Tapachula, the process of applying for asylum to travel through Mexico is believed to take up to 45 days, during which time it is unclear if the migrants are allowed to leave the campsite. What’s more, as little as just half of the migrants who made the route in 2017 were granted asylum by Mexican authorities, meaning many were forced to turn back.

Even though it appears that Mexican authorities have opted not to practice violence, police, journalists and migrants have been injured and one Honduran has reportedly died en route. Despite contradicting reports of the approach that the Mexican authorities have taken towards the exodus, a number of local Mexican citizens along the migrant trail have reportedly supported the migrants with donations of food and water, and even live music upon their welcome.

‘The migrant caravan was organised with a political motive.’

By a show of hands at a conference, people decide to go through Oaxaca instead of Veracruz. pic.twitter.com/HSt5qUM5b6

According to CNN, GOP House Majority Leader Kevin McCarthy recently claimed that the migrant caravan could be politically motivated. These allegations have further come alongside accusations that migrants have been paid to participate in the caravan from both the Venezuelan government and by Democrats who need the migrants to vote in the U.S mid-terms. The reality from the ground shows decisions being made by a show of hands amongst migrants.

‘People should be afraid of the Honduran caravan’

These are the kinds of emails I’ve been receiving while covering the caravan. More threats and insults than at any other time in my career. pic.twitter.com/VlSihscCpB

Fear mongering has been rife throughout the last week and has ranged from implying that the migrants are carrying unsavoury illnesses, to being full of terrorists and drug traffickers. In reality, the violent threats that appear to be felt the most by people working with the migrant caravan are from online trolls in the Westernised world.

‘It is a crisis at the Southern Border’

I will not close Colombia's border with #Venezuela. I don’t want military intervention. But we received almost 1m Venezuelan #refugees in under 2 years and if the dictatorship does not end, the migrant outflow will continue to grow. pic.twitter.com/R6nFDmtL5Y

Whereas the United States has caused outcry over 7,000 migrants that have yet to reach their border, Colombia has welcomed over 1 million Venezuelan migrants to the country as they flee from poverty and staggering inflation rates. The ongoing Venezuelan crisis has now spanned decades and the exodus of citizens is predicted to surpass the number of refugees that were documented to have fled from war-torn Syria.

It’s not all doom and gloom…

The Mexican City of… WHAT?
???? pic.twitter.com/CXmQR4wf3H

Schools to close due to water shortages in Mexico City