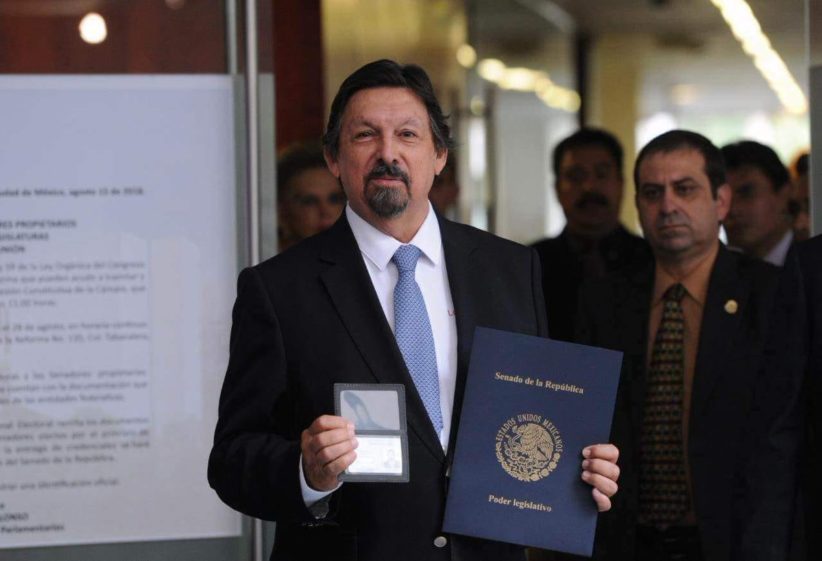 After twelve years of exile in Canada, former Secretary General of Mexico’s mining union, Napoleon Gómez Urrutia, is back in the headlines this week after an unexpected return to the country. Not only is the leader back, he has also won a parliamentary forum and will become a Senator for the incoming MORENA party.

His return marks the gradual yet fearless political shakeup that the elected party have alluded to throughout the recent elections, and one of many twists anticipated in the upcoming months

It was back in 2001 when Napoleón Gómez Urrutia was nominated to assume power of the mining union following the death of leader Gómez Sada. Despite the initial frustration that the successor was not registered as a miner nor an active union member, reported Sopitas, he became Secretary General of the union following a unanimous vote in 2002.

His tenure as union leader saw miners wages rise by 8%, as well as the securement of partnerships with leading US and Canadian counterparts. The controversy, which led to his ousting from the country links to the 2006 Pasta de Conchos tragedy, which saw 65 miners trapped and eventually die.

According to reports, it was February 19 when the Coahuila mine, run by Mexico’s largest mining corporation Grupo Mexico, experienced a massive methane explosion. Amidst claims that the gas leak had been reported several times by workers before the fateful day, more reports surfaced,  suggesting that the miners had conducted a number of strikes and there was a continuous suspicion that authorities could have certainly prevented the incident.

The miners, with just six hours of oxygen, remained trapped underground, and just two bodies have been recovered to this day. It is also still believed that authorities have failed to orchestrate a proper investigation.

Outrage following the mining incident spurred Napoleon Gómez Urrutia to become a fierce critic of the institutions deemed responsible. He called out the government as well as the leading mining company amidst accusations of ‘‘industrial homicide.’’ He also continued to campaign relentlessly for justice to be served whilst in the meantime a selection of 11 charges were brought against him in cases of suspected fraud. Although the leader left to avoid charges, during his time in Canada he was awarded a number of Human Rights awards for his contribution to Mexico’s labour forces.

The recent exoneration of charges means that the controversial union figure is back, and ready to once again dust off the case file that holds the bodies of 63 remaining miners once again.  Just yesterday El Universal released details of the Senator’s first press conference since his twelve-year absence. He spoke of reconciliation and the hope of justice as well as forging ongoing solidarity throughout the country.

Another politician killed in Guanajuato

International Day of the Disappeared revives controversy around Ayotzinapa case