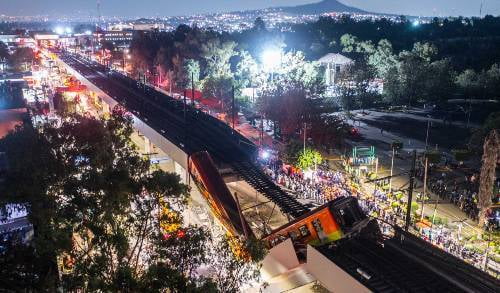 A year after one of Mexico City’s busiest railway overpasses collapsed onto a street below, Mexican authorities are failing to provide justice for the victims and relatives of the 26 people killed.

The Metro 12 line, or “The Golden Line” as it was often referred to, collapsed onto a busy street in the early morning hours of May 3, 2021, resulting in the deaths of 26 people, injuring over 100 more, and impacting the mobility of millions of Mexico City residents.

At the time, Mexico City’s government announced that the Norwegian risk consultancy DNV would carry out an investigation to determine the cause of the collapse. Their initial report, delivered on June 14, 2021, indicated that structural flaws, present since the overpass’ construction, led to its collapse.

Today, the consulting firm delivered its final report to city officials. The city government rejected its findings and refused to release the report, claiming there was a political conflict of interest stemming from a lawyer who worked on the report being involved in a previous lawsuit against Mexican President Andrés Manuel López Obrador, a political ally of Mexico City Head of Government Claudia Sheinbaum.

Mexico City’s prosecutor’s office also found that the railway design was prone to failure over time and in October 2021, pressed charges against 10 former officials involved in its construction which included wrongful death, wrongful injury and property damage.

To date, authorities have not carried out any legal proceedings in the case, with an initial hearing being set for next month.

In addition, the capital’s government disclosed that 90% of those affected by the collapse agreed to a settlement deal that included economic reparations, scholarships, and job opportunities.

According to Ernesto Alvarado Ruiz, the official who is overseeing the disbursement of funds related to the settlement, different state entities have dispersed the following funds:

Yesterday, President Andrés Manuel López Obrador shared his solidarity with the victims and said that The Metro 12 line is already under re-construction with Mexico’s wealthiest man, Carlos Slim, helping with the rebuild.

Mr. Slim’s construction firm, Carso Infraestructura y Construcción (CICSA), was one of the companies involved in the original construction of Metro Line 12. During the investigation, his company issued a settlement agreement, paying hundreds of thousands of Mexican pesos to the victims and their families in return for not seeking legal action.

“[Mr. Slim] is assuming full responsibility at no cost to the city’s government,” said Mr. López Obrador. “When suggested to him — regardless of the current investigation to determine accountabilities [for the collapse] — that the rebuilding work had to begin as soon as possible to finish within a year, he accepted and has been personally involved with the construction.”