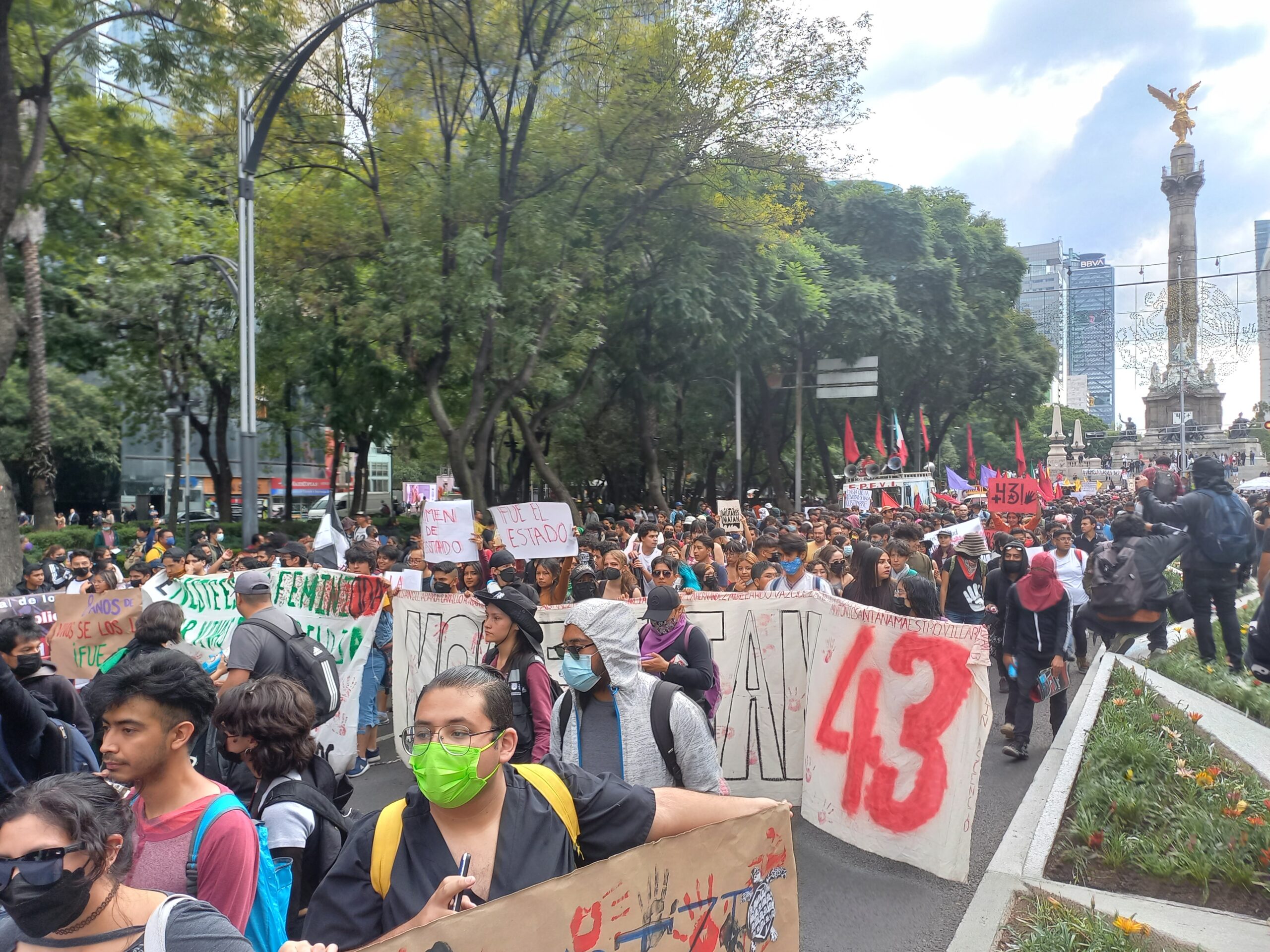 “We want everyone to fall from the bottom to the top,” shouted Blanca Nava, the mother of Jorge Álvarez Nava, one of 43 students from the Ayotzinapa Rural Teachers’ College who were disappeared in 2014 by organized crime groups and members of the Mexican military.

Ms. Nava, while holding a picture of her missing son, and other parents of victims of the massacre took to the streets of Mexico City on September 26, the eighth anniversary of the attack, to demand justice for their family members and to criticize the government of President Andrés Manuel López Obrador who has thus far failed to provide them with justice.

Marching down Mexico City’s main avenue, thousands of citizens from across the country walked beside the parents of the 43 students; worker unions, young students, feminist collectives, socialist organizations, and human rights defenders all took to the streets demanding justice.

Trucks equipped with speakers blasted Ska music while Mexicans old and young chanted “they were taken alive, we want them alive!” All those in attendance showing a sense of anger and comradeship against what they see as an apathetic Mexican government.

“This president promised to solve the case, perhaps to gain popularity so the people would trust him,” said Emiliano Navarrete Victoriano, a father of one of the victims, to a crowd of around 7,000 supporters. “If we achieved any small breakthrough with this government,” he said, when investigations started implicating elements of the armed forces, “everything fell apart.”

The Case of the Disappeared Students

On the night of September 26, 2014, a bus full of young people studying to be teachers were on their way to a protest in Mexico City in honor of the victims of the 1968 Tlatelolco massacre in which the military opened fire on civilians.

The bus was stopped in the small town of Iguala, Guerrero in western Mexico, by the Mexican military, who then reportedly passed the students to an illegal armed group, “Guerreros Unidos,” who disappeared them, according to a recent arrest report of a local military general.

In 2014, the government of then President Enrique Peña Nieto infamously fabricated a rendition of events that covered up the involvement of high-ranking public officials and military commanders.

The now debunked “historical truth,” as it came to be known, was the official version of the government at the time, manufactured by tampering with evidence and extracting signed confessions through torture.

AMLO’s Legacy on the Case

When President López Obrador campaigned for the presidency in 2018, he promised to deliver justice to the parents of the 43 students. While his administration has made some headway, critics accuse the government of not pursuing the highest ranking authorities behind the disappearance.

In August, the Mexican Prosecution issued 83 arrest warrants against 20 military commanders, including one general from Guerrero, 44 police officers, five judicial authorities, and 14 members of the criminal group “Guerreros Unidos” for their alleged involvement in the mass disappearance of the 43 students.

However, the students’ families were outraged when they found out how quickly the recent arrest warrants crumbled.

In September, Mexico’s National Prosecutor ordered 21 of the 83 arrest warrants to be discarded, including warrants for 16 members of the military.

Furthermore, a district judge acquitted over 100 people implicated in the case, including former governor of Iguala, Jose Luis Abarca, who has been fingered as the intellectual author of the attack.

While Mr. Abarca remains in prison due to two other charges against him, the judge’s decision caused outrage among the Mexican population and led the Undersecretary of Human Rights, Alejandro Encinas, to file a complaint against the judge with Mexico’s Supreme Court.

Jesús Murillo Karam, a former prosector in the Peña Nieto administration who had been accused of torture in order to fabricate the version of events laid out in the “historical truth,” had his criminal proceedings suspended by a judge following an appeal.

Thus far, only four military members have been indicted in the case, with their legal defense claiming that all allegations made against their clients are fabrications.

Families of the Victims Await Justice

For victim’s families standing in the plaza on September 26, they fear AMLO will provide those who are guilty of disappearing their family members with the same impunity as his predecessors.

“There are not only 43 who are missing,” said Ms. Nava. “There are thousands of missing people who are waiting for their father, their mother, their brother to come home to them; just as I am looking for my son and I want to see him back, I will not stop or stop looking for him until I find him.”

Third earthquake in 40 years to hit Mexico on September 19