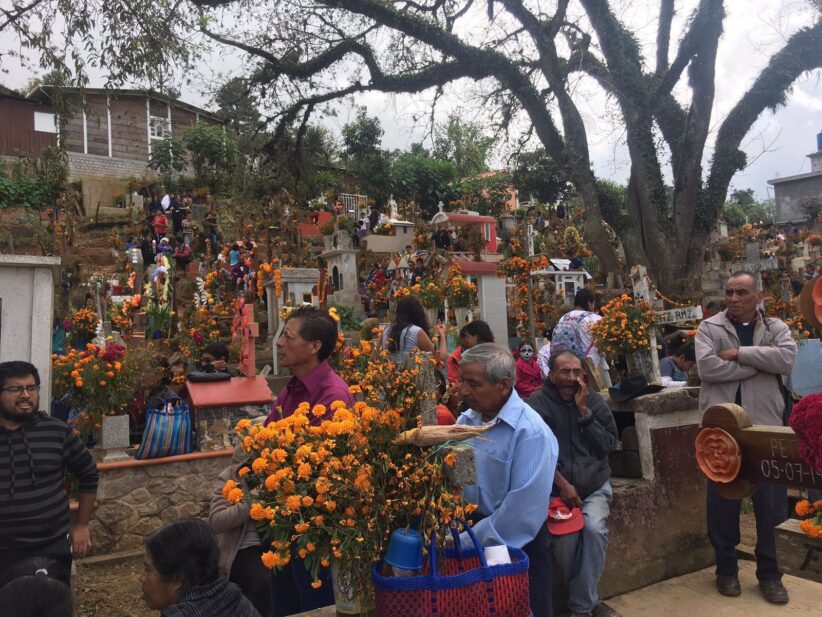 “Many of us have realized that something is happening to the Day of the Dead,” Joaquín Galván, from the indigenous peoples of Ayuujk, told Aztec Reports. “It is being deprived of its identity,” he said.

Commonly associated with the first two days of November, the Day of the Dead is a celebration of death and a time to remember and honor those who have passed away.

Considered a world heritage event, in Mexico, the dead are usually venerated through the altar of the dead, where family members leave offerings in the form of food and drinks for their dearly departed.

However, for Galván’s family from the Mixe (also known as the Ayuujk) community, an indigenous nation from the state of Oaxaca in Mexico’s southeast, the celebration spans weeks before November 2.

For the Mixe people, the celebration is prepared in early October, when the cemeteries and graves are cleaned and decorated. The celebration of Okp Xëë (Day of the Dead) represents a sacred ritual and a celebration that involves the whole community.

“It feels like even better than when Christmas comes around,” said Galván.

Similarly, Mario López Palma, 68, from La Venta in Mexico’s south-southeast holds this tradition with the same sacred and communitarian values as Galván.

Just like his grandfather, López Palma invites his relatives to welcome the souls of their loved ones on the nights of October 31 and November 1. Eating and drinking while remembering their passed on relatives until the light of the traditional candles dies out.

“We see death with joy, knowing that according to the traditions, they are among us, we do not see them, but we feel accompanied by all of them; by grandparents, our parents, uncles, aunts, and cousins. Young people who have also gone on the journey. They all have their picture on the altar,” said López Palma.

However, many like Galván have been wary of how these values and traditions have been eroding in recent times.

A tradition under siege

“The Day of the Dead is first and foremost a ritual. It is, above all, a sacred space for families and the community. But now, it is represented outside of this ritual aspect. This identity is being plundered,” said Galván.

According to him, nowadays, the Day of the Dead has been reduced to a product for touristic consumption, leaving behind the sacred and communitarian characteristics essential to the indigenous tradition. “It is focused on foreign tourism, especially white tourism,” he said.

Local governments have used the Day of the Dead to attract domestic and international tourism, promoting entertainment events that have little to do with the holiday’s original meaning.

In the municipality of Valle de Bravo, in central Mexico, the local government held the “Festival de las Almas” commemorating the Day of the Dead, which featured a symphonic concert of Elvis Presley’s music.

In San Miguel de Allende, a small town known for being a US expat hotspot, tourists were welcomed at a luxury American restaurant where a diverse selection of DJs played electronic music in the “Calaca Festival” on November 2.

As Galván argues, the festivity and how some governments celebrate it has been heavily influenced by western representation, especially from the US.

“I think this misrepresentation of the Day of the Dead became more acute thanks to all this foreign influence like with the James Bond movie and the Disney movie Coco,” he said.

The annual Day of the Dead parade celebrated in Mexico City had its debut on the big screen when the English spy, James Bond, played by Daniel Craig, disrupted a colorful parade in the streets of Mexico City in an action-packed chase in the 2015 film “Spectre.”

Seeing the potential international appeal, Mexico City’s government started holding what is now an annual tradition that, before the 2015 movie, did not exist.