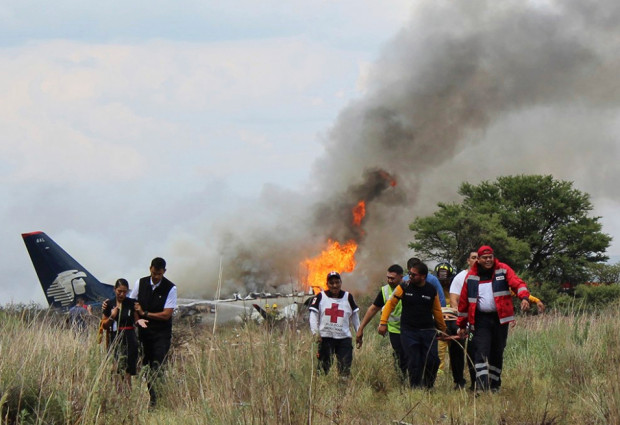 In this photo released by Red Cross Durango communications office, Red Cross workers and rescue workers carry an injured person on a stretcher, right, as airline workers, left, walk away from the site where an Aeromexico airliner crashed in a field near the airport in Durango, Mexico, Tuesday, July 31, 2018. The jetliner crashed while taking off during a severe storm, smacking down in a field nearly intact then catching fire, and officials said it appeared everyone on board escaped the flames. (Red Cross Durango via AP)

Three Mexican pilots have been fired by Aeromexico after the airline discovered they were not following protocol when their airliner crashed at the end of July.

The Aeromexico-operated Embraer passenger jet crashed just after takeoff in Mexico’s state of Durango on July 31 however miraculously all 103 people onboard survived and managed to escape before the plane caught fire.

According to eyewitness accounts, the plane had taken off during strong wind, hail and rain and as recently as this week reports have suggested that the cause of the incident was linked to bad weather conditions and a microburst, which is a naturally occurring weather phenomenon.

So far there has been denial of any human involvement in the crash, and Reuters recently quoted Jose Armando Constantino, the director of analysis of accidents and incidents for Mexico’s civil aviation agency who also agreed that it was initially believed there was no human error involved.

“There is no evidence that the motors had a mechanical or technical problem,” Armando Constantinto told a news conference. “The air speed indicates there were many fluctuations, there was an external factor. The external factor is a microburst, the probable cause (of the accident) was due to meteorological factors.”

By contrast to these earlier reports, however, yesterday Aeromexico officials announced that three pilots were relieved of their posts following the jet crash. According to reports, there were claims that a trainee pilot was in fact seated in the co-pilot’s seat during take off and although control was regained by the commanding pilot just before the incident, this counters airline protocol and could have placed the entire plane in danger.

Nevertheless, the investigation maintains that the ultimate cause of the crash was weather-related and believed to be caused by a microburst, identified as a small yet intense downdraft caused by rain that is one of the most dangerous wind storms to be encountered by a plane. It is, in fact, a weather condition that has caused countless of plane incidents in the past such as the Delta Airlines Flight 191 in 1985 which killed 137 and the US Airlines Flight in 1994 which killed 37 passengers, both flights – out of a number more – lost control during a dangerous microburst.

The firing of the three pilots, noted in a letter to employees of Aeromexico yesterday, pointed out that their actions still violated a plethora of procedures and company policies, which would not be tolerated by the airline.

Two women struck and killed by train while taking a selfie