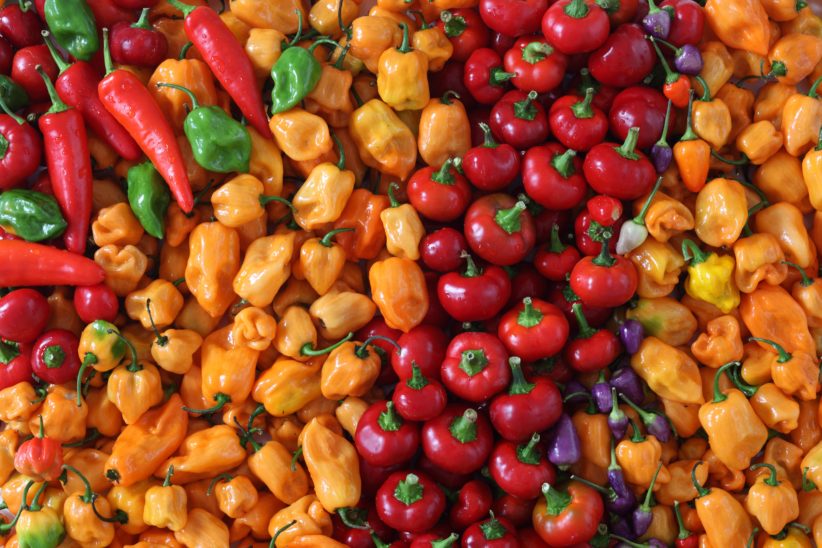 “I won’t repeat the exact words that came out of my mouth – but I can assure you that it was burning terribly“: When Alejandro Torres, then Ph.D. candidate in Mexico, cleaned up after a day in the laboratory and accidentally touched his eyes, he cried with surprise: By chance, he had managed to produce Capsaicinoids, the pungent compound of chilli peppers known for spicing up Mexico’s signature dishes. His startup Applied Biotech is now working on engineering this ingredient for a wide range of uses outside the kitchen, including natural pesticides and self-defence pepper sprays. In Mexico’s startup sector, chilis have proven far more than a popular condiment, and inspire tech-savvy minds from Biotech up to Blockchain.

Mexico sports more than 100 chilli types, of which the small, round and innocent-looking Habanero hailing from Yucatán is the country’s hottest one. Habaneros are rated up to 350,000 on the Scoville scale, the ‘gold standard’ for measuring the picante, its spicy potency. Too hot even for many Mexicans, it seems, as the undisputed king of the colourful peppers is the slightly milder Jalapeño, accounting for about 30% of agricultural production in the country.

While culinary fans inside and outside of Mexico pepper their food with the burning spice, most animals, insects, fungi or bacteria seem to show much less affection for the hot ingredient. As a result, chilli extract can be used as a natural substitute for chemical pesticides to deter pests. Furthermore, mixed in coatings for cables or marine paint, it helps to safeguard against bites or biodegradation. And on humans, it can be used to create pain-relieving creams – or mixed in pepper sprays for personal security.

However, isolating Capsaicinoid, the sought-after ingredient producing the sharp burning on the palate is a challenge. In fact, producing about 1 kg of Capsaicinoids require about 5 tons of Jalapeno Peppers, say Torres and his team – that is about 30 football pitches of an agricultural field.

By producing the burning essence through an artificial but “green” biotechnology process, the startup wants to contribute to saving land. Furthermore, “it is not only the agricultural land that can be optimized but also the use of fewer chemicals. We also have relatively little waste because we can reuse many of the ingredients from production”, says Torres about his sustainable mission. His team works with Mexican specialist from the Istituto de Biotecnología of the UNAM in Cuernavac, and was invited earlier this year to the Netherlands as part of the HighTechXL Accelerator.

The biotech startup for natural pesticides is not the only ‘hot’ trend in Mexico’s tech and startup sector. Heat-seeking investors can now pepper their portfolio with the first cryptocurrency backed by chilli pepper.

Going by the name of Agrocoin, the blockchain-based digital tokens are backed by Habanero chilis grown in Mexico and were first brought to the market this year. Each 500 Peso of Agrocoin relates to one square meter of chilli production in Quintana Roo state on the Yucatán peninsula. Behind this unusual currency is the Mexican startup Amar Hidroponia. Dubbed El Rey de Habanero (‘The king of Habanero’) by the Entrepreneur magazine, the company has recently established itself as the world’s largest producer of this spice, Mexican media report.

“We had a lot of people who wanted to invest, but with less money”, explained Rodrigo Domenzain, the President of Amar Hidroponia the reasons for turning to blockchain to boost his finances.

The Mexican startup is not the first time vegetables enter the blockchain arena: Earlier this year, Prodeum, a “produce-backed” cryptocurrency startup that promised to revolutionize the fruit and vegetable sector made furore by pulling an exit scam that left investors without any trace of their money. But even with the bitter aftertaste of this affair still lingering, investors still seem to be eager to sample the spicier variant of cryptocurrencies: The Mexican startup claims it has already sold 50,000 Agrocoins of the 1 million it is planning to issue.

Chilli-based inventions are cooking up in the startup sector

Chilli peppers are not only national heritage, but they are also a huge business opportunity for the country. Chilis are currently Mexico’s third-largest export, reaching almost a billion dollars in value last year, according to the Mexican Agency for the Marketing and Development of Agricultural Service (ASERCA). Around the world, there are ample examples of smart entrepreneurs that capitalized on the popular spice – such as the US entrepreneur Ed Currie, an ‘ex-addict’ that turned self-made millionaire by creating a range of “hellish” hot sauces.

In Mexico, more startups may await if the classic hot salsa is mixed with the latest technology and a bit of innovativeness. The small pepper is still full of surprises: Earlier this year, Mexican scientist found a molecule of the spice that might be able to cure obesity. And internationally, scientists are investigating whether the potent spice might be able to reduce the risk of cancer.  Mexico’s chilli sector remains a hot one to watch for more startup ideas – if you remember not to touch your eyes.

Another journalist found dead one day after presidential inauguration