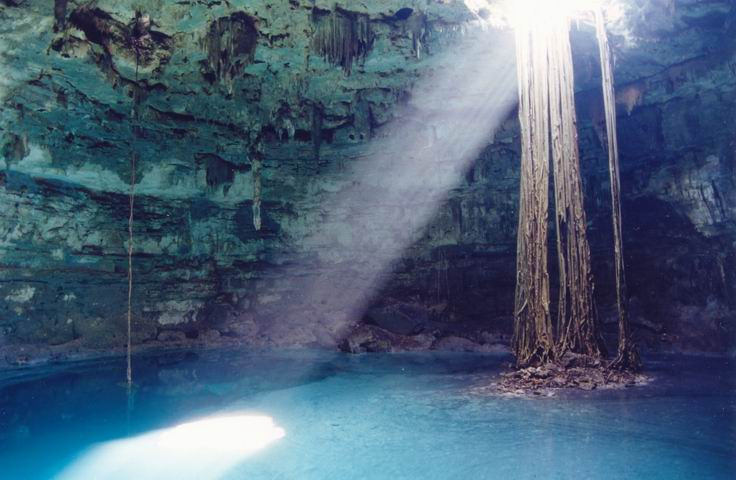 Although many readers will know that the fate of dinosaurs was met with a phenomenal asteroid which changed the face of the earth and paved the way for the eventual succession of humankind, perhaps less are aware of where this asteroid actually hit and the repercussions that the location still has to this very day.

In more science-savvy circles, however, that location has been identified as the Chicxulub crater, which sits just beneath the Yucatan Peninsula in Mexico.

The crater’s epicentre is located one kilometre below the town of Chicxulub Puerto, a town of just a few thousand residents and a typical Yucatan residential feel. There is little here even today that conjures up the memory of this important prehistoric location, and it still remains a place of little interest on the main tourist trail that centres on other locations such as Cancun.

Believed to have spanned up to 15 km in diameter, it is the third largest asteroid to have hit the planet, however, the force at which is stuck the Earth led to mega-tsunamis, earthquakes and volcanic eruptions around the globe and years of darkness which wiped out the majority of life on Earth.

It is also a discovery which was only made relatively recently in the late-1970s. Spotted by scientist Glen Penfield, it was during a study carried out with Mexican national oil company, Pemex, that a survey map of the Mexican Gulf revealed some unusual rock formations that formed a semi-circle arc that resembled an impact crater.

Since the discovery of the asteroid location, scientists have continued to work relentlessly within the Yucatan Peninsula in order to understand the secrets behind the catastrophe. Their studies have identified that at the time of the impact, the force of the explosion was so phenomenal that it turned rock to liquid, whilst also forming a mountain that was twice the size of Mount Everest.

Although little exists in the testimony of the large asteroid, which both sealed the fate of the dinosaurs and also contributed to the rise of mankind, one fascinating tourist attraction has been identified as the by-product of the collision.

There are actually thousands of cenotes that are dotted around the landscape of the Yucatan Peninsula, and they are certainly one of the most sought-after tourist spots in the area. These freshwater or saltwater sinkholes are both iconic, picturesque, and even served Mexico’s ancient Mayan civilisation as a source of drinking water.

Satellite imagery of the Yucatan peninsula, however, revealed a pattern in the creation of the cenotes and pointed to an image that the watery caverns formed a near perfect ring. Work alongside NASA led to a staggering revelation that these formations, in fact, formed the edge of the crater of the Chicxulub asteroid which had hit the earth over 65 million years ago.

The cenotes are the largest connection of underground caves in the world and boast turquoise waters, fascinating natural wonders and also a plethora of Mayan archaeological artefacts dotted throughout them. They take centuries to be created in the limestone rock through a degree of water erosion, however, it is believed that the forces in the asteroid hit contributed to the very geological balance which would make these cave formations possible.

Scientist now await the result of a request to make the ring of cenotes into a UNESCO world heritage site, but essentially, the wonder of this otherworldly creation it this:  The asteroid which led to the death of the dinosaurs, weakened the makeup of the rock so much that it allowed for the of some of the world’s most beautiful natural Mayan water sources.