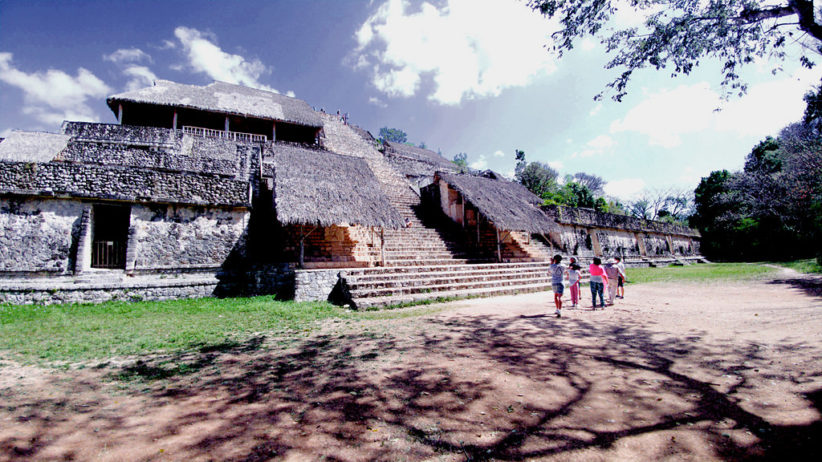 MERIDA, YUCATAN – It was February 1, this year, when British backpackers Harry Miller and Emily-May Newton decided to visit the famous Mayan ruins at Ek Balam, located on Mexico’s Yucatan Peninsula.

Having travelled the globe for nearly two years, it was second nature to the northern couple to research their destination prior to leaving, arrive early to avoid tourist crowds and soak up the ancient culture that has attracted wonder from visitors to Mexico. East of Merida, the well-preserved Mayan city was operational for over 1000 years and boasts a variety of temples that attract hundreds of visitors every day.

Arriving at the entrance to the site the pair, and many others that had made the early morning journey were met with employees changing the price signs to almost double what they had expected. Instead of expecting to pay around 250 pesos for entry, they would now be paying 413 pesos (US$21.63). Confusion among the tourists ensued, many checking online to clarify the price hike and debating whether to enter, and yet the biggest losers weren’t necessarily the visitors.

Having already made the journey, the majority of the tourists that morning opted to pay the increased price despite park staff being unable to explain why the price has risen. As for Miller and Newton, however, the price hike meant they were then unable to pay for a tour guide – many of them, local residents in the area – once inside.

According to the new secretary of tourism for Mexico, Miguel Torruco Marques, 2019 is expected to welcome growth in the number of international tourists by 5.8%. Citing the anticipated arrival of over 44 million visitors to Mexico, as a result, the amount of accommodation services across the country are also expected to increase and economic growth will come hand in hand. Even though just last week a U.S national was killed in Acapulco, Guerrero, Mexico continues to be an appealing and exciting travel destination.

It was also on February 1, that the Yucatan state government decided to enforce large increases to the prices of many of the tourist attractions in the state. This meant that it wasn’t just visitors to Ek Balam that received a surprise, but also visitors to one of the new seven wonders of the world Chichen-Itza and other ruins on the peninsula.

The decision initially led to protests from local tour groups and concern from the tourism sector citing overall economic losses and a decrease in visitors. On the contrary, the price increases were allegedly expected to be used to improve maintenance across the sites.

The catch, however, is that the price increases were not advertised, and continue to not be published, on any official websites that were easily accessible to foreign visitors. Nor was there any notification at the archaeological sites in the days prior to the increase.

Further investigation revealed that the price increases applied just for the state of Yucatan, which meant that sites in other states such as Quintana Roo – where you can find the Tulum ruins – remain the same price.

A representative from the Yucatan tourist information services, who wished not to be named, confirmed that the new price increases cannot be easily found online. Producing a printout of the 2019 prices, the representative then explained that there are, in fact, two fees provided to every tourist attraction. That of the national entry tax (INAH) derived from federal decisions, and that of the state cost, which is the price that has been risen. When asked what the increased state cost is invested in, the tourist representative had no answer, explaining that the national tax tends to be used for upkeep of such sites.

The Government of the State of the Yucatan is yet to comment when asked where the funding is being invested into.

According to Riviera Maya News, local tour companies both in Quintana Roo and the Yucatan expressed concerns over the proposed price increases. They explained that it will have a negative impact on the popular locations, and lead some visitors to seek cheaper options in Quintana Roo. Pre-paid tours that were already arranged prior to the price increases also remain in the balance.

It seems unlikely that the price hike will affect the many tourists who have already committed to visiting Mexico, especially from destinations such as the United States. However, when factoring in travel options to the locations and accommodation often in higher price brackets, low-budget travellers might be the ones who suffer the hit, further affecting the livelihoods of local residents that rely on tourism.

No INAH is charged on this site

Up to six people can split this price

No INAH is charged on this site

Could a ban on non-biodegradable sunscreen help to save our coral reefs?