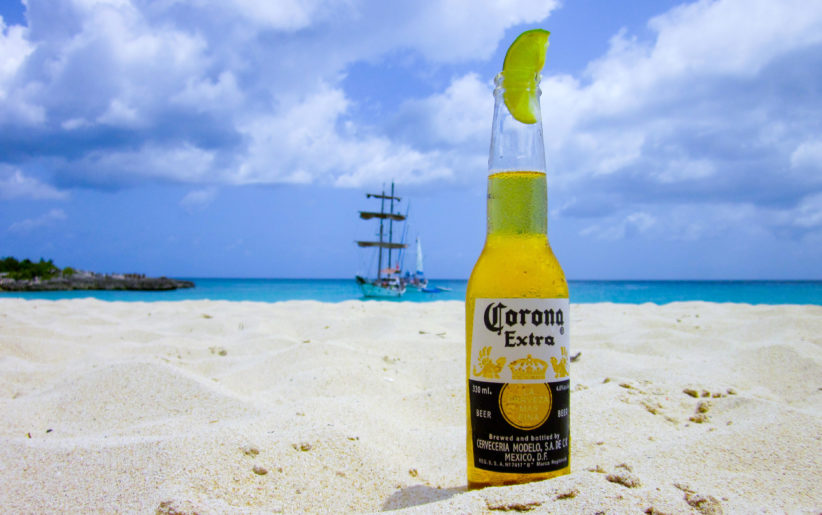 Six-packs of Mexican beer brand, Corona, are no longer going to be sold in plastic ring holders, with the company behind the alcoholic beverage announcing their packaging is set to be replaced with a biodegradable alternative.

The company behind the Mexican-born lager famously served with lime, Grupo Modelo, announced that the alternative beer holders will be made from a vegetable by-product and will replace the plastic.

The idea has been welcomed by eco-groups and forms part of the Grupo Modelo’s partnership with Parley for the Oceans in a bid to pioneer environmentally friendly alternatives in the industry. Establishing a strong connection between the beer and beach-life around the globe, the two organisations have since worked together on 300 clean-ups and used 7,000 volunteers to collect plastic waste that would otherwise be damaging to the environment.

So far, three million pounds of plastic waste has been retrieved by the organisations instead of going into the oceans and they continue to further work towards protecting 100 islands from plastic pollution by 2020.

One of the most pressing issues facing plastic reuse in the Latin region, of which six countries rank in the top ten most diverse countries in the world, is a lack of education. Although customers in Colombia, Chile, Antigua and Barbuda are charged for plastic bags in some supermarkets you need just take a trip to the Amazon river to see where some of that waste will end up floating. Similarly in Peru for instance, local stalls tend to serve food in plastic bags and as local water sources are often undrinkable, plastic bottles are rife.

For Corona’s latest endeavour, the new biodegradable holders will eradicate the use of plastic on their products altogether. Before officially launching across the country, however, the new packaging will be trialled in the sunny beach area of Tulum, Quintana Roo,  a popular tourist spot with picturesque sea life.

Although plastic beer holders pose just a fraction of the vast problem of plastic waste around the globe, it is a move that has been welcomed by environmentalist and is, in fact, just one of several major beer producers that are looking to improve the eco-friendliness of their products. Just two months ago, Danish beer brand Carlsberg announced plans to swap plastic ring binders with a glue that would connect the beers together, but also be easily extracted when needed. According to The Independent, the move would mean an annual amount of 1,200 tonnes of plastic is saved from heading to our oceans. The company also hoped to reduce carbon emissions to zero by 2030.

Two years ago, Florida-based Saltwater Brewery also announced plans to make plastic beer holders out of barley waste and will completely disintegrate after three months in the ocean. The product is also edible and not harmful to marine wildlife.

Billions of tonnes of plastic have been produced around the globe in the past few decades, with most of it not being recycled and ending up in dumpsites or in the ocean. It has led to plastic particles spreading around the world and entering food chains, as well as recently being found inside Amazonian fish. As the global voice for concern gets ever louder in regards to the environment, the lager manufacturers are setting an example for businesses to see the benefits of going green.