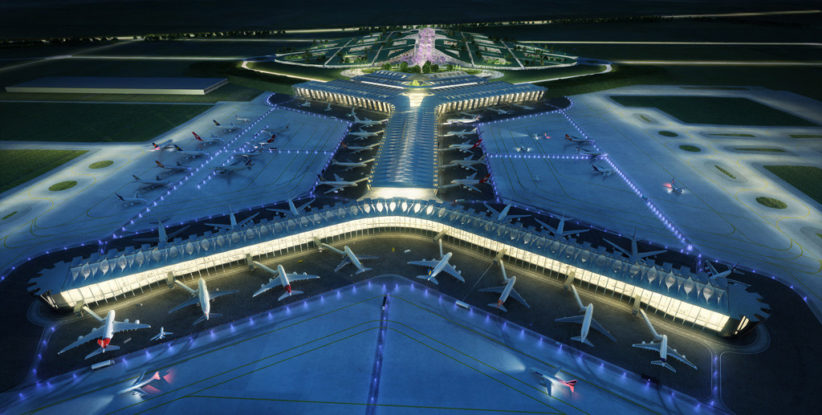 By the time Mexico’s former president Enrique Pena Nieto left office at the end of 2018, over 102 million pesos (over US$5 million) had been spent on promoting the new airport build in the media.

The new construction at Texcoco was already underway when in November 2018 the then president-elect Andres Manuel Lopez Obrador held a referendum which led to the cancellation of the construction.

Citing massive amounts of ‘ecocide’ within the valley such as the deforestation of current reforestation projects, activists had claimed that not enough study has been conducted on the environmental impacts on surrounding areas.

The decision, however, has so far left a question mark over the future of the semi-built airport, and the amount of money that had already been invested in the build.

According to Animal Politico, the NAIM airport project was the largest build associated with the Pena Nieto administration but details of media spending have only recently come to light.

It was in 2015 that the administration spent 56 million pesos (nearly US$3 million) on two campaigns, one of which promoted the airport architect Norman Foster as well as another relating to job growth. The campaigns were plastered on bus advertisements as well as in magazines and newspapers. The TV stations Televisa and Azteca then went on to receive payments for further positive advertising of the airport, and leading newspapers El Universal and Excelsior also received vast sums of money for advertising purposes. According to the report some 86 media companies and news reporters received a payment linked to promotion of the airport in 2015 alone.

Though details related to spending were not released in 2016, the following two years also showed media expenditures across the country in favour of the Mexican airport build.

The total amount is six times higher than the amount of federal funding committed to the prosecutors office for forced disappearances within the country, explains Animal Politico, at a time when the country is facing an overwhelming amount of organised crime violence and kidnapping.

Despite substantial spending and what some could argue sounds like a plot line from Mexican satire, The Perfect Dictatorship, the outcome of the campaigns proved somewhat fruitless. Amidst claims that some people were able to vote numerous times, low voter turnout, complaints over the wording of the referendum question and also claims that the official website was down for periods of time throughout the vote, 69.9% of the one million voters chose to halt the partially built site in favour of building two new runways at the current Santa Lucia location. A further 10,000 people across 538 municipalities are believed to have spoiled their vote.

The one-third built airport which was set to cost over $13 billion to fully construct, suffered some investment losses as a result of halting the project. There are now plans to hold a shareholder meeting in an attempt by the government to buy back the shares.