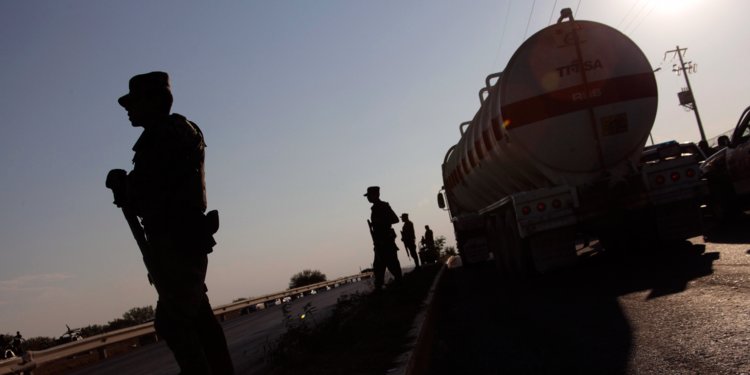 A shootout took place in northern Mexico on Tuesday which left five dead, including one police officer. The altercation occurred when a group of fuel thieves started shooting on the highway in the state of Chihuahua, reports U.S News.

According to local reports, the shootout involved at least four tanker trucks that were carrying stolen gasoline as well as a number of pickup trucks and bulletproof SUVs. The attack also involved a high-power 50 caliber rifle and a number of holes were pierced into the hull of the tankers, and one leaked the fuel.  Local authorities have stated that a police officer had been responding to reports of gunshots when he was also killed at the scene.

No arrests have yet been made and local reports remain unclear on who exactly the shootout was between and whether the initial shots were fired between the gang and authorities, or other gang members.

The theft forms part of a lucrative fuel-stealing industry that sees Mexican cartels capitalise on taking fuel from government-run piping. There are on average 60 illegal taps into pipelines daily within the country.

Speaking to Reuters, an oil refinery worker has spoken of how he was contacted by cartel members who wanted his help. According to the report the pump worker, the cartel had resorted to beatings and torture to get information on the time and location of oil movements, until he was forced to seek asylum overseas.

Despite clampdowns by the recent government on the country’s drug trade, oil theft has offered a new means to make substantial money at less of a risk. However the incoming President’s plans to reshape the energy sector, build a new refinery and invest considerable money in the state-run Pemex oil and gas producer, combined with an increased effort to fight drug cartels might lead Mexico’s organised crime groups to look for more desperate measures.

Third woman murdered after being lured with clothes for newborn