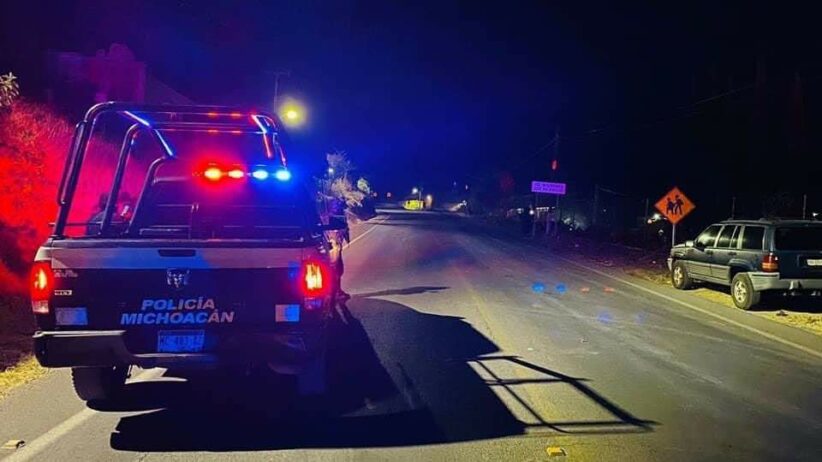 Police vehicle in Michoacán. Image courtesy of @janethleontv on Twitter.

According to reports, around 10:30 PM local time, authorities were alerted to multiple gunshots at the venue. The police department and Mexico’s Forensic and Crime Scene Services arrived at the scene, where they reportedly found five people injured and 19 deceased. Another man reportedly died on the way to the hospital, bringing the total number of deaths to 20 (17 men and three women).

Local prosecutors allegedly found over 100 bullet casings and they confiscated 15 vehicles. According to initial reports from local media, the massacre was believed to be carried out by criminal group “Los Correa”, which allegedly were looking to target a rival leader of The New Generation Jalisco Cartel.

The area has seen an uptick in violence following military incursions on cartel territory in the region.

Subsequently, local digital news media, Red Michoacán, reported different gunshots on the outskirts of Zinapécuaro, with the armed forces and the National Guard deploying patrols throughout the city.

During his daily press conference, Mexican President Andrés Manuel López Obrador lamented the shooting and ensured an investigation team was sent to the area.

“It was a massacre of one gang against another in a clandestine Palenque [arena] where they were, and they (the gunmen) arrived and shot the attendees, and unfortunately there were many dead… It was the gangs that are operating there, but a team has already headed there for the investigation and to attend to the issue,” said Mr. López Obrador during a press conference.

According to the government’s figures, homicides nationally have receded in the past months, with the beginning of 2022 showing a decrease of 14.4% compared to last year and a larger difference of 19% when comparing the same period in 2020.

However, violence in Michoacán has only escalated in the past months. Despite increasing the National Guard presence in the state, with 3,100 patrols deployed from January to March, Michoacán has become the most violent state in Mexico.

In 2021, for instance, Michoacán reported 2,732 homicides, roughly 8% of the country’s  33,315 total homicides that year. In 2022, the Secretariat of Security and Civilian Protection disclosed that Michoacán registered over 480 homicides averaging eight killed every 24 hours.

The surging violence has not limited its victims to gang members and affiliates.
Michoacán-based journalists and politicians such as Armando Linares, who was killed after denouncing his colleague’s murder just months earlier, and Cesar Arturo Valencia Caballero, mayor of the town of Aguililla, are amongst the latest civilian victims of the violence.