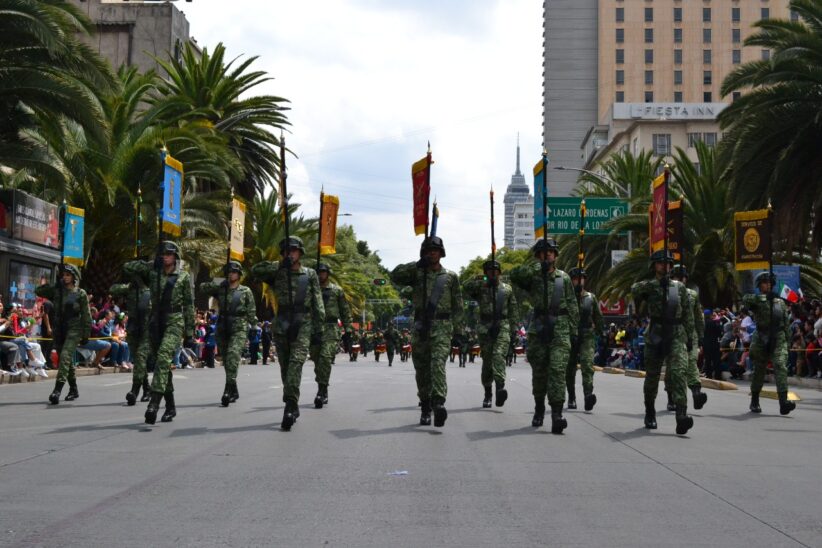 In late August, Mr. López Obrador sent to Congress an initiative to give Mexico’s Ministry of National Defense (SEDENA) control over the institution which was originally intended to be civilian controlled.

The bill was quickly approved by the ruling party, MORENA, and its allies in both chambers of Congress. Mr. López Obrador later ratified it through a presidential decree issued on September 9.

However, on Monday, a district judge suspended indefinitely the transfer of control of the National Guard to the Mexican military following a series of appeals filed by citizens’ rights activists Uniendo Caminos México.

“Thanks to the suspension, the National Guard transfer to SEDENA is at a standstill,” Joan Sada, human rights defender and lawyer for Uniendo Caminos, told Aztec Reports. “Until a Judge rules whether the transfer is constitutional or not, no movements can be made from one Ministry to another,” he explained.

Furthermore, the judge ordered that all resources transferred so far to the army be returned to the Ministry of Security and Citizen Protection, the civilian body which originally commanded the National Guard.

According to Mr. Sada, the legal team behind Uniendo Caminos has filed 72 appeals in their attempt to hamper the transfer of resources and infrastructure of the National Guard to the military, which they see as a violation of Mexican law.

Mr. López Obrador has often claimed the absorption of the National Guard by SEDENA is a measure designated to prevent the former from becoming corrupted. However, Mr. Sada warns that militarizing the country’s federal police institution carries dangerous consequences.

“SEDENA considers human rights defenders a high threat in the same way as terrorist groups or drug traffickers,” said Mr. Sada, citing leaked military reports revealed by the hacking group Guacamaya. “It has been proven that the military has wiretapped journalists and activists.”

In early October, the Guacamaya collective stole six terabytes of information from the Mexican military, revealing troubling human rights violations by officials, including the surveillance of journalists and activists.

Mexico has ranked amongst the deadliest countries for journalists and activists in recent years.

Another leaked report revealed that SEDENA even considered human rights defenders and feminist collectives a security threat, equating them with drug trafficking organizations and terrorist groups such as AL Quaeda and Hezbollah.

“SEDENA has that opacity, said Mr. Sada. “But now imagine the National Guard, which is the one that acts as federal police. It would be the same and just as opaque. We wouldn’t know their actions if they have links with drug trafficking or if they are surveilling citizens. This obviously puts civil society in grave danger,” he said.

The militarization of policing in Mexico

Since the start of his presidency in December 2018, Mr. López Obrador’s empowerment of the Mexican military has been unprecedented, starting in May 2020, when the president issued a decree that empowered the military to engage in public security tasks.

Similar attempts to militarize the country’s peace strategy have already been made, including the internal security law issued by then-President Enrique Peña Nieto and discarded by the Supreme Court in 2019.

But where his predecessors failed, Mr. López Obrador succeeded, mainly thanks to his party, MORENA’s control of both houses of Congress and his popularity and political clout.

Despite his multiple campaign promises of withdrawing military troops from peacekeeping tasks, records show that Mr. López Obrador always planned to rely heavily on the army.

A 2006 confidential cable leaked by WikiLeaks revealed that Mr. López Obrador always intended to give more power to the military “because it is the least corrupt of all of Mexico’s agencies and can be the most effective.”

Four years into his presidency, the military’s role has increased, not just in public security but also in customs administration and the construction and management of airports and large development projects such as the Maya Train.

For now, Mr. Sada and Uniendo Caminos México are still in a legal struggle to keep the National Guard away from further militarization.

“I am going to wait for the judges to make their decision, and if it is constitutional, well, I would also like to thank the people who were supporting us, but I will be very much alert to all the activities carried out by the Ministry of Defense, the Navy and the National Guard at the appropriate time,” he said.