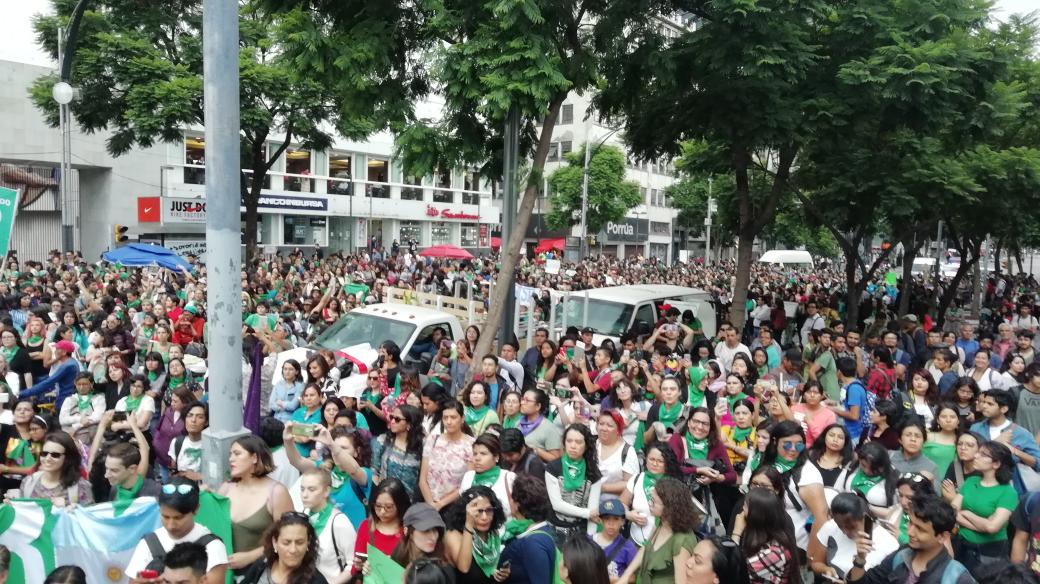 In the early rouse of this morning, after sixteen hours of debate, Argentine Senators came to a momentous decision which meant that the right to an abortion within the country would remain prohibited but it is to be decriminalised. The debate has been the most talked about topic within the country for some weeks, and like other momentous decisions across the globe such as Brexit, the divide in support largely came down to a generational divide between the young and old. What it means, is that Argentina is to remain but one of the countless Latin American countries in which abortion is illegal.

Some 7,000 km away, in a different continent entirely, the support for progressive change in Argentina was reiterated in Ciudad de México. Throughout the debate, a march painted the streets of México’s capital green as they held banners of support for their southern neighbour. It mainly consisted of university students, a section of society around the world identified with being vocal, and also that which is most likely to be affected by abortion laws. They produced banners that stated, “aborto legal para no morir,” (Legal abortion to not die) and “que te valga vulva si quiero abortar,” (why should you give a shit about my decision to abort).

It is in fact only in the district of México City that an abortion is legal. The legalisation of a foetus up to twelve weeks is a right that has been allowed in CDMX for eleven years whereas it is an illegal procedure in the rest of the country to varying degrees (occasionally matters of rape or life endangerment qualify). Last year there were thirteen public abortion clinics in the capital who were providing free abortions, after which the majority of patients are sent home with contraceptive methods such as an IUD, reported El Pais. Between the public and private clinics who provide the service, over 130,000 abortions have already happened since the law was passed.

There is still some way to go for a number of countries in Latin America and even places such as the United States appear to hold uncertain futures on the freedom of choice. But what would have happened, if for example, Buenos Aires had taken up a similar concept to México City, where abortions are legal up to 12 weeks?

According to The Guardian, since México City legalised abortion up to 12 weeks, 16 states out of the 31 within México have reinforced laws that sternly prohibit abortion from the point of conception.  On top of this, some choose to enforce some of the strictest punishments for an abortion, which means that even women who have experienced a miscarriage could potentially face prosecution or even a term in jail. The aim of tightening of laws has been to prevent any chance of future changes and has meant that in some areas even the use of contraception such as IUD’s has been put in jeopardy. As a result of a tightening on policies particularly in more rural areas, doctors are also left ethically torn when suspecting that an abortion is self-induced and whether the patient should be reported to authorities.

It is also sometimes not possible to reach México City, especially when statistically the most common women to seek an abortion are young and from developing areas. Although the prevalence of Catholicism across the country (which makes it the second most Catholic country in the world) means there is an ongoing stigma against abortion in México, the number of clandestine abortions is on the rise both within México and across Latin America. According to Time, three-quarters of the 6.5 million abortions that occurred across all of the Latin American countries combined were clandestine, meaning they were performed in non-professional, illegal settings in which 45% of poorer Méxican women experience complications that are often not medically attended to.

In México City, yesterday’s march for pro-choice solidarity was not just about Argentina. The rally was also campaigning for México’s other states to legalise abortion – of which out of the 31, the state of Yucatan is the most lenient and sometimes allows abortions for economic reasons. Although Argentina’s decision is final for the time being,  it has the potential to spark a worldwide momentum, which is at least a vote of confidence for younger generations. However, the example that México can teach is that the legality of abortion is not 100% effective if it remains at just an independent state level, and conservative rebuttal has not made abortion safer in México.