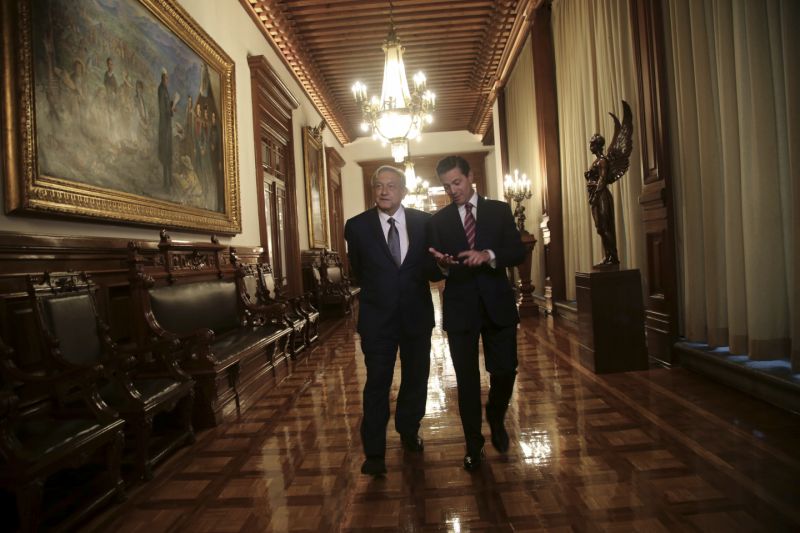 It was on Thursday, Aug. 9 at the National Palace in Mexico that incoming President-elect Andrés Manuel López Obrador met with outgoing Enrique Peña Nieto for further security talks which form part of the ongoing discussions that officially start the transition process.

As well as receiving a certificate from the current President which identifies AMLO as the official President-elect, yesterday the two leaders discussed matters of security and agreed to work together in the creation of two new federal offices prior to December; the Department of Public Security and a General Prosecutor’s Office. Lopez Obrador also proposed the acceleration of new prosecution appointees, reports El Informante.

In a statement from the President-elect yesterday, he outlined a major re-shake in his personal security which will see a selection of twenty men and women to protect him who might not be specifically formerly trained in security. The announcement comes amidst a wave of increased organised crime throughout the country which has seen over 145 politicians murdered since last September and it marks a stark difference from Nieto’s current security measures.

The meetings are essentially geared at ensuring a smooth transition is orchestrated both by AMLO’s  Morena party and the PRI party that is currently in power, and it is believed that further meetings between the two parties have been agreed to later this month.  According to El Informante the current government has also assured that it will remain committed to their work until the transition day in December.

The meetings also appear to point to pre-emptive plans to have public security and prosecution personnel in place for when AMLO assumes power. Avoiding any delay in the appointments, it is set to mark a stringent clamp-down on corruption and crime by the new leftist government, in a country tired of a political system that has in many ways failed its citizens. Part of his incoming promises also suggests that AMLO will receive half of the wage that Nieto earns as well as stopping the use of a presidential plane, even to the point of selling it off.

In some ways, AMLO appears to diplomatically resemble Uruguay’s much loved former President, José Mujica. His Uruguayan counterpart too opted for a more frugal presidency, opting to purchase a medical helicopter rather than a presidential plane, not living lavishly and essentially changing the image commonly associated with politics. The reality, however, is that AMLO has a more difficult task on his plate and a more pressing threat of danger as a result of promising to directly attack the cartels and internal corruption. The New York Post recently even reported that a journalist had managed to interview him whilst driving a motorbike next to his small car.

“We are working in harmony, we want change along the path of concord, of national unity, of agreement, of reconciliation and we are moving forward in that direction,” AMLO was quoted as saying yesterday. The incoming President has certainly cemented a promise of change in the majority of his policies.