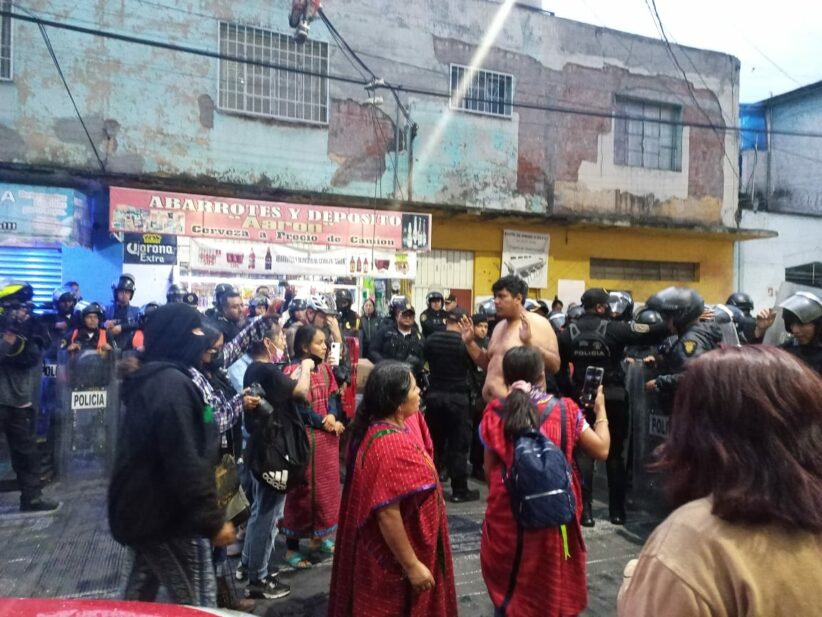 Local authorities in Mexico City allegedly forcibly removed demonstrators from the indigenous Triqui community, who, for over a year, have camped in Mexico City’s main square after paramilitary groups displaced them from their land in southern Mexico.

The community, which was camping along Benito Juarez Avenue, one of the main entrances to Mexico City’s historic center and National Palace, was disbanded in the early hours of Monday morning with its members relocated to an improvised “shelter.”

According to the Triqui people and the National Indigenous Commission, local police removed the protesters from the camp without notice. Different organizations denounced the removal as an act of repression by the authorities, with members of the community reporting injuries and some losing their belongings.

“When the grenadiers lifted the blockade, they pushed and shoved our comrades threatening them. Once we arrived at the supposed shelter, where we didn’t have a roof, we realized that the place was set up in a parking lot where a local market used it as a garbage dump. The trucks arrived with our belongings and threw them on the ground as if they were garbage.”

By Tuesday, the community was reportedly relocated to an improvised “shelter” assembled by the local government, with police officers containing over 16 women, 12 children and two men inside the designated location.

According to the indigenous community, any attempt to flee was met with force, sparking clashes between the armed police and the displaced demonstrators.

Different organizations and politicians have spoken out about the matter and some have labeled the relocation of the protesters a “kidnapping.”

Mexico City Senator Emilio Álvarez Icaza Longoria denounced the alleged “shelter” and “repressive” measures by the government on his Twitter account, calling the facility where the protesters were relocated to a “dump.”

After 40 hours in lock down, the President of the Human Rights Commission of Mexico City, Nashieli Ramirez, negotiated to have the members of the Triqui community transferred to the headquarters of Mexico’s Student Movement.

Video of Ms. Ramirez announcing the agreement between the government and the people of Triqui.

Martí Batres, Mexico City’s Secretary of the Interior, denied the allegations of forced removal and repression saying that the displacement was carried out over health and safety concerns, stating that reports of malnutrition amongst the children in the camp and health violations were the reasons behind the disbandment of the camp.

The official also claimed that the Triqui community willingly left their encampment and that the conflict between them and authorities was instigated by outside political groups.

The Triqui Displacement from Oaxaca

In late December 2020, the Triqui community, originally from the southern state of Oaxaca, woke up to the sound of gunshots when paramilitary forces took over their territory in the small towns of Tierra Blanca and Copala, forcing hundreds into exile. [2]

“At 8 a.m., the shootings started. During the attack, my brother-in-law was killed, and his three children were wounded. We decided to come here. We had nowhere else to go,” details Ms. Eloina Martinez Triqui woman from Tierra Blanca.

As a result, the Independent Movement for Triqui Unification and Struggle (MULTI) was formed, urging President Andrés Manuel López Obrador to help free their territory from the paramilitary groups who had seized their land to maintain political and economic control.

The Triqui struggle in Mexico City is not an isolated event; domestic migration in the country has been largely fueled by instances of forced displacement at the hands of organized crime and paramilitary organizations..

According to the Mexican Commission for the Defense and Promotion of Human Rights (CMDPDH), Oaxaca is one of the most significant examples where displacement has been mainly driven by paramilitary violence and the state’s intervention.

The report notes that the Triqui community is one of the most affected by violence. As of today, 35% of its population has been displaced.

“We have asked the government to support us somehow, and they can’t give us that. We don’t want money. We are looking for justice for those who have been killed. All we want is to go home,” said Ms. Eloisa Martínez.