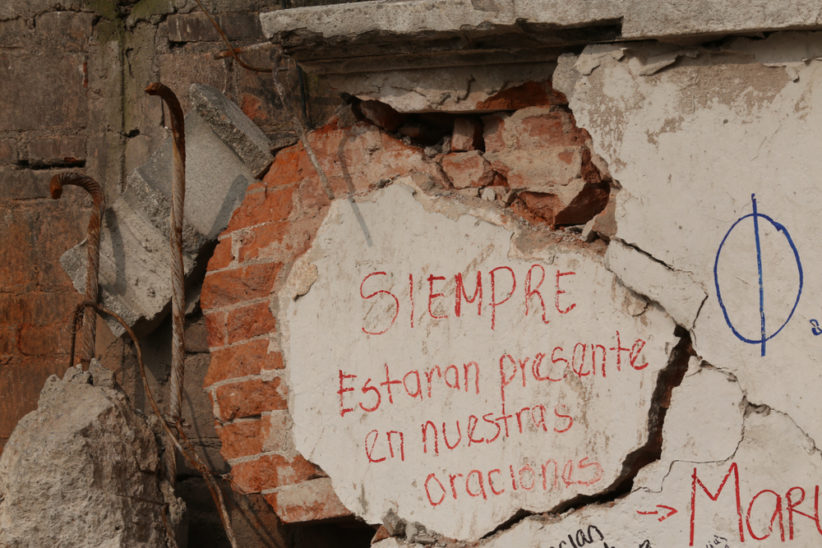 A day ago last year, an earthquake registering 7.9 in magnitude struck the outskirts of Mexico City, an area already affected by a previous earthquake that had occurred just 12 days before.

Together, government estimates calculate that the two quakes claimed around 500 lives, leaving around 250,000 people homeless and affecting some 12 million in total.

September 19 is a date that sends chills down the spines of many Mexicans. On the very same day in 1985, an even stronger earthquake in region of the country’s capital had far more tragic consequences, killing around 9,500.

Yesterday, as the Mexican flag was flown at half mast on the anniversary of these two natural disasters, family and friends mourned the lives of their loved ones lost to the many buildings, apartments, schools and health centres that collapsed as a result of the quake.

One of the worst affected demographics were students. According to government figures released this month, a total of 13.9 million pupils were affected by the two quakes that occurred in September of last year.

At the beginning of the 2018-2019 school year, government reports claimed that 100% of pupils whose education infrastructure was affected by the earthquake were back in full-time schooling. The state of Morelos, however, was reported as an exception, registering 99.9% attendance.

However, speaking to NPR, public finance researcher at the Mexican Institute for Competitiveness (IMCO) think tank Manuel Guadarrama claimed that the state is in fact far from completing repairs after the damages incurred by the earthquake.

“There is a significant delay in getting access to these [earthquake recovery] resources,” he said, adding that “there are a lot of communities that are still waiting for the government’s help.”

Furthermore, according to a recent Radio Ambulante podcast entitled ‘It’s Not Our Problem,’ which discusses the governmental response to rebuilding the many schools that were destroyed during the earthquake, investigative journalism research provides several reasons to believe that the percentage of pupils back in full-time education still does not reach 100%.

In the case of reconstruction of the schools damaged by the quake, the buildings were classified using a colour-coded risk assessment. Red was used for schools that required a complete rebuild, yellow for those with partial damages and green for educational institutions that could resume normal teaching activities. Ratings were issued by certified project supervisors.

However, it has since been revealed that these buildings should have also been assessed by experts in seismic engineering as well as certified project supervisors. Despite this, a shortage of these engineering experts in the city at the time forced the National Institute of Education Infrastructure to look for other methods of support.

Related: How can Mexico’s startups prepare for natural disasters?

This, combined with several other irregularities, saw the numbers of schools on red alert for rebuilding gradually reduce, a difference picked up on by journalists Nadia Sanders and Irene Larraz, who both conducted investigations for the Radio Ambulante podcast.

Therefore, despite government confirmation that almost all pupils had returned to classes as normal, it is evident that students at Mexico City’s Leonismo International School, along with many others, are still suffering from disruption to classes.

Yesterday, memorials were held at schools across Mexico City including the infamous Enrique Rebsamen School that made headlines for irregularities in its construction, which contributed to the collapse of one of its two buildings on the day of the earthquake, killing 21 children.

According to reports by the Associated Press, only 62 of the 411 buildings marked out for demolition after the earthquake have actually been destroyed. A further 1,000 still have not received the reinforcements they were promised after being seriously damaged.

Speaking to the news agency, Consuelo de Luna, who lost her son to in the earthquake said, “it’s difficult. All the memories come flooding back of everything. I can’t find words.”