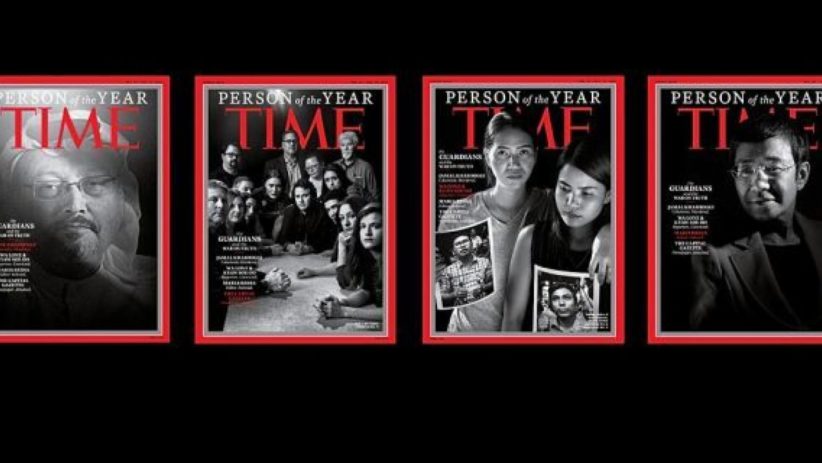 Earlier this week, Jamal Khashoggi became one of the people that Time have chosen to make person of the year.

The journalist, who was killed in a Saudi Arabian consulate in October as a result of his work in journalism, became the first deceased person to be given the honour in a much celebrated move around the world. His portrait joined three other Person of the Year covers which honoured the might of journalism, and the dangers that come alongside the job, that continue to take precedence around the globe.

The series is called The Guardians, and honours the pursuit of truth despite great dangers.

This year, 52 journalists have been killed around the globe according to data from the Committee to Protect Journalists (CPJ). The result, which factors in crossfire, murder and dangerous assignments, is already six up on last year however this data only looks at death’s where the motive of the killing has been confirmed.

It is increasingly common knowledge that Mexico has become a dangerous place to work in news reporting, with this year the country ranking the most dangerous in the world for the forced disappearances of journalists. It is also, however, not uncommon for attacks towards the press to come hand in hand with increased injustice and the wider violence which the country is currently facing.

Vast impunity levels, failing state protections and ongoing battles across organised crime groups has seen the country continue to plummet into disarray over security and corruption. Although this month’s new president Andres Manuel Lopez Obrador has promised to shake-up security measures, the amount of journalists that have been killed in Mexico in 2018 is almost on par with war torn countries such as Syria and Yemen, with countless more threats and media aggression going unreported.

The majority of cases have so far been unsolved and yet, despite the blurring of organised crime and political influence exposing what appears to be a direct attack upon the country’s democracy through journalist attacks, the country’s press continues relentlessly forward.

In light of this year honour given towards the guardians of democracy around the globe, today we name the Mexican journalists who also lost their lives this year as a result of their work in Mexico’s pursuit of truth.

Seventy-seven year old journalist veteran Dominguez Rodriguez stopped his car at a red light in the northern Mexican state of Tamaulipas when he was stabbed 21 times by two unidentified assailants. He had worked for a number of Mexican publications such as Noreste Digital and focused on national and international politics.

Two months later, six people had been arrested in connection with the murder, including three journalists and the nephew of former Nuevo Laredo mayor, Carlos Cantú Rosas Villareal, of whom Dominguez Rodriguez appeared to have been critical. The authorities confirmed that he had been killed in relation to his work in political coverage.

The Mexican journalist and satirist known as Paminka was shot dead at the restaurant she owned with her husband in the city of Acapulco at the start of this year.

On her Youtube channel she covered topics of news such as crime and politics for the state of Guerrero, and according to CPJ occasionally mocked local politicians in her satirical reporting. After months of threats against the journalist and a smear campaign around the town which detailed her name as a target from local organised crime groups, a government official was eventually implicated in the killing of the 36-year-old. At the time of the killing, it was reported that a federal investigation had not been opened into her death, however, by August of this year a report claims that an unnamed assailant was arrested in connection with the death.

Vazqued Atzin, journalist at Enlace Informativo Regional was shot dead at the restaurant he owned close to Mexico City. Although he had kept his writing anonymous, the writer was linked to a number of articles about crime and corruption and is believed to have began reporting threats he received prior to his death.

At the time of his killing, sources suggested that the threats the journalist had received told him to stop reporting on a local mayor, however no-one has been arrested in relation to the killing thus far.

Correspondent for El Heraldo de Chiapas, Mario Leonel Gómez Sánchez was murdered in front of civilians and in view of CCTV outside his home by gunmen on a motorbike. Two days later, a suspect was arrested and identified as a member of a local criminal organisation as well as the release of several other names that the authorities were investigating.

The 41-year-old had been working for eight years as a journalist for the Heraldo de Chiapas, and covered a variety of topics from general news, crime, politics as well as recent elections. In the past two years the journalist had reported a number of threats to authorities, however CPJ suggests that the allegations were never officially investigated by the police. There has so far been complete impunity in bringing his killers to justice.

What these four journalists have in common is that their areas of work link to both politics and reporting on crime. What’s more, none of their killers appear to have been placed behind bars and questions remain as to the state of many of the investigations.

However, the year has claimed countless more victims, and although their deaths are yet to be tied to their work, the underlying connections between crime, political reporting and the types of attacks as well as the failure of Mexico’s legal systems point to Mexico firmly cementing its spot in one of the most dangerous places in the world for journalists.

It reveals a crisis facing the freedom of the media, fuelled by impunity, which places Mexico’s news reporters on the front line against corruption. Time’s honour towards journalist this week is just one step in the journey to protect citizen’s right to truth around the world.

The digital age of parenting, made in Mexico