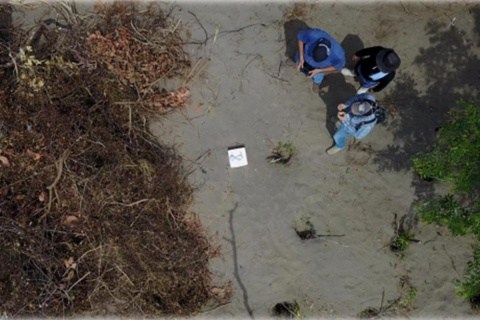 The remains of 166 victims have been unearthed in a clandestine mass grave in Veracruz Mexico.

It marks one of the largest such graves that has so far been discovered in the country and comes alongside 114 identification cards which were also found amongst the burial pits. The use of mass graves is a trademark of organised crime groups which continue to wreak havoc throughout the country, expected to have the highest amount of murder rates this year and making it one of the most dangerous countries in the world for gang-related violence.

According to reports, the clandestine burial pits were full of human remains as well as clothes and personal belongings, however, investigators are currently counting just the amount of skulls in order to confirm the total amount of victims. For security reasons, authorities have chosen not to reveal the exact location of the burial pits. It has since come to light that drones and radars are being used to scour the area and scan under the ground to locate human remains, some of which were buried at least two years earlier, and the likelihood of unearthing more remains possible.

The graves sadly possess the tell-tale signs of cartel involvement, in an area that continues to be dogged by turf wars between the Jalisco and Zetas cartels.

Between December 2012 and June 2018, there were 11,268 kidnappings officially reported in Mexico, a number of these were victims of criminal gangs who demand a ransom for a person’s return. According to a report by the Registro Nacional de Datos de Personas Extraviadas o Desaparecidas (The National Registry of Data of Missing or Missing Persons) which was dated from April 2017, between the years 2009-2015, irregularities were also detected in the investigations of missing persons due investigative and police failures. Although these figures relate to more than just gang-related forced disappearances, Mexico’s attempts to reduce narco-trafficking and the violence surrounding it have stagnated and with them, the police force’s abilities to solve cases sometimes appear to be marred with suspected corruption. Police have been implicated in recent kidnapping cases such as that of when police were charged with selling three Italian men to an organised gang, before disappearing earlier this year.

El Solecito Collective is an organisation helping families find missing persons throughout Mexico. The organisation, consisting of a number of people who have lost members of their own families that have disappeared due to gang crime continue to search for unmarked graves across the country. The group has uncovered over 300 bodies hidden in graves around Mexico’s Gulf, which serves to highlight the mere tip of Mexico’s gang and cartel problems.

Regardless of whether the deceased were involved with unsavoury dealings, the situation also does not shy away from the ties between police authorities and the local cartels, a fear that the families of missing people have expressed following news of the recent uncovering.  It was only recently that 19 police officers in Veracruz were arrested for orchestrating the killing of 15 civilians, and similarly in 2015 police officers were implicated as selling five youths to the same cartel organisation.

The ongoing and increasingly random threat of kidnap is something that Mexican citizens demand that the new government find a solution to. The reality, however, is that the cartel grip and gang’s continuing evolvement, alongside authority corruption, means the majority of criminals and their vicious crimes go unpunished. The question remains how long citizens are willing to endure the violent control of gangs.