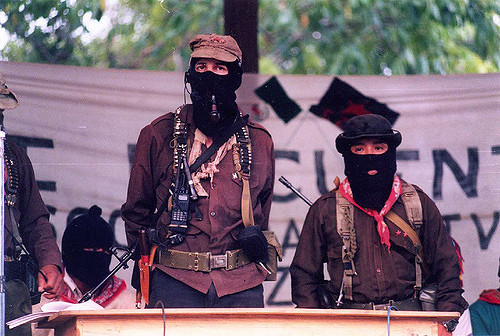 The Zapatista Army of National Liberation (EZLN) commonly known as The Zapatistas, is a leftist political and social movement that started in the Mexican state of Chiapas. Active since 1994, the movement is renowned for its signature black balaclavas and defined by revolutionary tendencies, though this identity has become somewhat softened in recent years.

The group has invested itself in the interests of indigenous Chiapa people who have been neglected by government decisions, subject to diminished human rights and make up the majority of members to the EZLN. As well as this, The Zapatistas embody a socialist ideology and its peasants’ rights movement was championed by the left.

Chiapas state is recognised as the poorest area of the country and despite an abundance of natural beauty,  statistics placed the poverty level at 74% just five years ago.

During this period the Mexican authorities had agreed to sign into a North American free trade deal (Nafta). The deal would mean that native land ownership was no longer protected and many people feared that they would lose ownership to privatisation.

It was on the first day of the year in 1994 that thousands of people rose up against the government in a rebellion that lasted 12 days in the Zapatista Uprising. Targeting the area of San Cristobal Chiapas the rebel army, consisting mostly of barefoot locals, declared war on the government by devastating town halls, government offices and attacking an army base and releasing 179 prisoners. Despite using the jungle for cover, 400 people died when the government decided to bomb San Cristobal whilst at the same time denying human rights organisations access to the area.

The rebellion, which lasted for twelve days, had taken over the majority of the southern state of Chiapas with speed and surprise. Women fighters were also recognised as taking leading roles as commanders before a ceasefire was tentatively laid out.

The uprising, which campaigned for basic necessities such as land ownership, food and a home, had left countless dead. There was no clear resolution but it had brought media attention to the area.

As a result of the uprising 24 years ago, The Zapatistas began to create their own autonomous communities that did not answer to local governing. These Caracoles, built on land that was taken by the group in the 90s allow decisions to be made at a local level and claim to provide inhabitants with more personal freedom and rights. Women especially have increased equal rights in relation to other indigenous groups. At the time, the movement was also run by a charismatic leader, Subcomandante Marcos who maintained a popular image by smoking a pipe through his balaclava.

It has been claimed that low-key warfare quietly continues between the EZLN and the government,  that resulting in arrests and civilian deaths to this very day. An example of this was recorded during a BBC visit to a small, peaceful Zapatista community named Acteal wherein 1997 paramilitaries stormed the village and murdered fifty unarmed men, women and children.

Although the Zapatista movement raised considerable awareness of indigenous rights, no real agreements or solutions were provided by the government. Poverty levels and the quality of life in the state still remain considerably poor and violence is rife.

In recent years the group has turned to political avenues in order to remain vocal, despite not agreeing with the political system. Last year, The New York Times reported that the Zapatistas had endorsed María de Jesús Patricio Martínez as the 2018 Presidential candidate and had recognised that violence would be ineffective in the new political arenas. The actual President-Elect for 2018 recently slammed the EZLN as a political stunt.

To this day, the communities are considerably opposed to outsiders visiting, appearing to keep their identities hidden with balaclavas and the activist group continues to stand for the beliefs that spurred the revolution over twenty years ago. Signs like “in this place the people rule, and the government obeys,” that can be found in the village of Oventik, are rife around Chiapas.

Alfonso Cuarón: An Aetuer In Every Sense