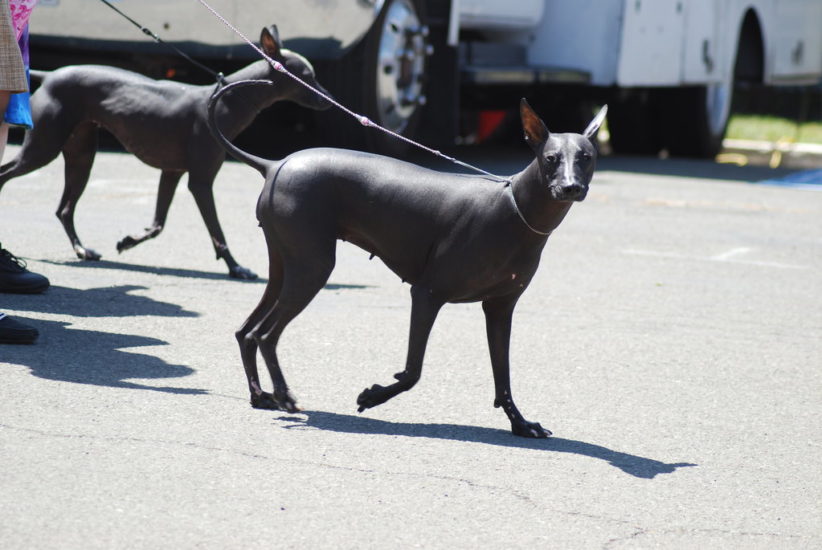 It was to be my first experience of meeting a Xoloitzcuintli dog.

The breed, which also recently featured in the Pixar film Coco, is revered as a famous Mexican symbol entrenched in the country’s history which reaches back as far as the Aztec empire.

When I entered the room, Janis – inspired by Janis Joplin – excitedly leapt up at us and in a bout of exuberance bounced off the furniture and hurried around the room. Janis’ breed, however, is unlike your typical fluffy canine friend. A tuft of wispy, fiery orange hair stuck up on ends from her head and she wore a pink dog coat to keep her warm which, when taken off, exposed her dark grey skin. Commonly known as the Xolo dog, Janice and her breed are in fact hairless and when stroking the dog it feels more equivalent to a wrinkly human skin than a cuddly pup.

Not to be mistaken with the Peruvian Inca Orchid, the breed comes in various forms across the Latin American continent, however, Mexico’s loveable hairless best friend is believed to be the oldest and apparently made its way to Latin America with the first settlers from Asia.

The Xolo’s trademark image is borne from a gene default which eventually became a dominant trait in the animal family. As well as being loyal servants in the ancient kingdom of the Aztecs, their association with the underworld god of lightning, Xolotl, defined the dog as mankind’s guide into the depths of the world beyond. In Aztec mythology the animal is believed to have been created by the gods to protect the living whilst also protecting the souls as they embark on their journey into the afterlife. Their names, as a result, are made up of two ancient words: Xolotl, the god of lightning and death, and itzcuintli which refers to ‘dog’.

It was during the ancient Aztec empire that ceramic statues of the Xolo were buried with their owners as a representation of the imminent journey. Sometimes, the actual pet was buried alongside their deceased owner. Their other roles across the empire, however, varied from being an occasional food source, to also being hot water bottles for sick people because their bodies were roughly two degrees warmer than humans. Christopher Columbus also documented that many Aztecs would wrap their Xolos in blankets to keep them warm. Despite almost becoming extinct due to Spanish settler’s taste for the animal, the dog breed made a revival in the 1900s and became a prominent feature in the world of leading artists such as Diego Rivera.

Prone to losing their teeth, a hanging tongue usually contributes to the traditional Xolo image and having survived the hunger of the Spanish Inquisition, the hairless canine is identified as the country’s national dog. In popular culture, this Mexican dog was a much-loved feature in the Pixar Coco and the breed has also been in the running for the ‘World’s Ugliest Dog’ title a number of times.

Popular culture, however, also means that the films that grace our screens and the characters that capture an audience’s heart, often leave many people desiring to have a piece of the real action. This has led to the threatening of clownfish after the creation of Finding Nemo and even more so attempts to stop avid Game of Thrones fans from buying huskies.

Janis was an excitable and lovable dog to say the least. Although the joke was that her yellowing combover resembled that of a certain U.S president, the dog’s energy and intelligence certainly shone through. Xoloitzcuintlis, are great companions even for people with dog allergies and, entrenched in culture and history of the ancient underworld, they hold a powerful sentiment in Mexico. Purchasing any dog, however, must be a well informed decision.