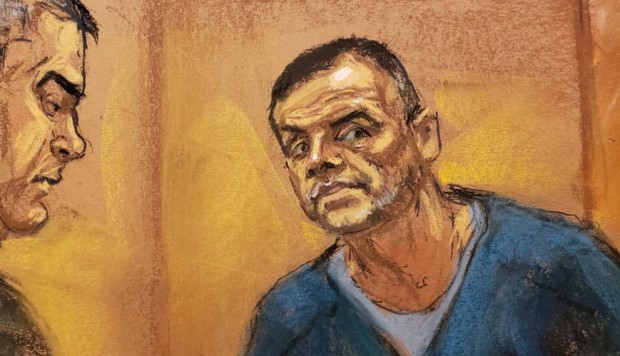 Pedro Flores, one of the Chicago-born identical twins implicated in Joaquin ‘El Chapo’ Guzman’s narcotics empire, recalled his first meeting with the Mexican drug kingpin as well as noticing a naked man chained up close by.

He is the first national of the United States to go up against Guzman and speak in the trial.

Now serving a fourteen year sentence for distributing millions of dollars worth of cocaine in the United States, the brothers have since helped with the capture of over 50 people involved with the drug industry, and yesterday began testifying against El Chapo in the New York Court.

His testimony is believed to continue throughout today, becoming the latest in a long line of high-profile witnesses.

According to reports from the court house, the US national had begun working in the drug trade early on and took over the family business with his brother, Margarito, following their father’s death. The now 37-year-old had grown the business into a multi million dollar organisation by the time he met El Chapo for the first time. In his testimony he recounted how he had been kidnapped, beaten and left without food for almost two weeks before, believed to be with the help of El Chapo himself, Flores was released.

The witness continued to paint a large picture of the scope of Guzman’s drug empire, his influence across the continent and also the degrees of violence that came hand in hand with the shady dealings.

Throughout yesterday’s testimony, Flores had also begun by just referring to the accused as ‘the man’ before being pushed by lawyers to identify him by his full name. He spoke of the fear for his young family which then led the narcotics dealer to strike a deal with authorities and continue recording dealings with drug dealers from Mexico.

Flores follows a line of high-profile people that have testified against El Chapo such as former Colombian drug trafficker Juan Carlos Ramirez.

Although El Chapo has been behind bars for some time now, it is believed that the cartel continues to function despite having their leader in jail. Instead of stemming the flow of drugs, severing the leadership has led to a number of splinter cartels and increased violence throughout the country as people battle to take control. The Guardian noted, just as with the death of Escobar, little appears to have changed in drug circles except a shift in trafficking routes.

Considered one of the most high-profile trials to go forward in the United States, it is believed that the defence is deflecting blame onto the witnesses, who are painted to be even more dangerous than El Chapo. The jury is kept anonymous and everyone also has a guard throughout the case, and there appear to be no cutting of corners in tightening security around the courthouse.

Minimum daily wage to be increased across Mexico