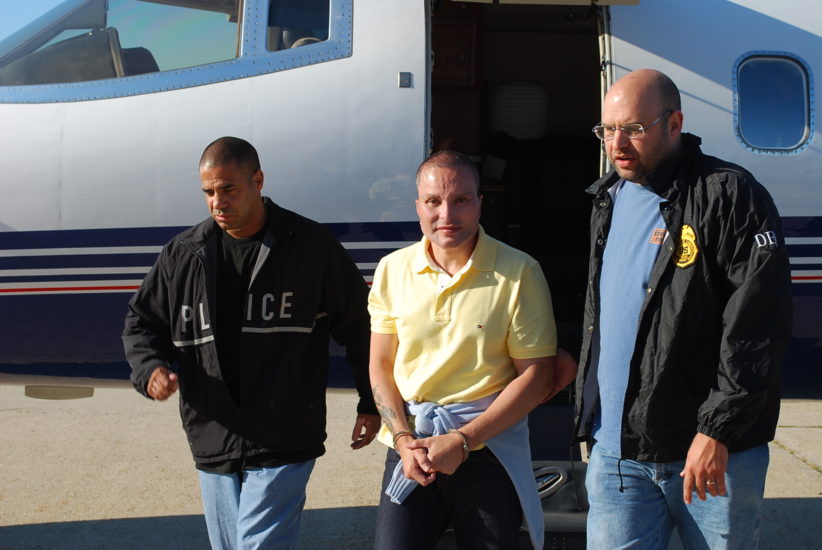 Having been arrested in 2007, the Ramirez painted a brutal picture of international narco-trafficking and how Mexican organisations controlled by Guzman were tasked with ferrying the narcotics across the border and into the United States.

“You were a handsome man,” William Purpura, El Chapo’s defence attorney joked on Tuesday in an entertaining light and much to the objection of prosecutor Andrea Goldbarg.

“All right, you weren’t a handsome man,” the lawyer responded, according to the New York Post.

The reason that Ramirez’ appearance was brought up is because the narco-trafficker underwent countless plastic surgery procedures in a bid to evade capture by authorities.

The now 55-year-old was eventually caught in Brazil and this week during his testimony explained that he had received plastic surgery to his cheeks, jaw, ears, nose and eyes. His now extreme features, such as large, fake cheekbones make him quite a notable character, with reports that his transformations had begun in the 1990s whilst he ran the North Valley cartel from his mansion in Brazil.

Whilst the jury had the chance to inspect the most recent face of the former Colombian drug lord, he also detailed countless links to El Chapo and how the Mexican narco-trafficker was well involved with the violent drug trade – despite the fact the accused is currently pleading not guilty.

Guzman’s defence team has already argued that El Chapo is not the main organiser of the cartel, implicating a number of high-profile Mexican politicians and suggesting that the drug lords testifying against the Mexican are framing him in a bid to secure their own federal deals.

Ramirez’ interesting face, however,  does not distract from the damning evidence he is providing about his connections to Guzman.

Throughout his three days of testimony, Ramirez spoke of as many as 150 people he ordered to have killed in a series of brazen and to-the-point answers.  From a family working for him in the United States to the assassination of seven people who attempted to kidnap his son, he joined the dots between cartel involvement and unprecedented violence.

His alleged 17-year working relationship with Guzman had been fruitful in the narcotrafficking world. According to the testimony, Guzman proved himself to be the best by moving 4,000 kilos of cocaine before springing up a partnership with a much higher yield, resulting in plane and boat shipments that amounted to millions of dollars of profit for Guzman and the Colombian cartels.

Upon one boat journey, it was revealed that the captain sampled the product before eventually causing panic and sinking the ship. Another shipment was hit by a hurricane, however, Ramirez claims he was repaid for the losses at the hands of the Mexican cartels.

It might sound worthy of a telenovela, or even a scene from Narcos, but the twists and turns of Guzman’s high-profile trial could see the Mexican face life behind bars if found guilty. The 61-year-old is up against 11 counts of drugs trafficking, money and weapons laundering and the trial is far from over.

Although El Chapo has been behind bars for some time now, it is believed that the Sinaloa cartel still continues to function despite having their leader in jail.

Instead of stemming the flow of drugs, severing the leadership has led to a number of splinter cartels and increased violence throughout the country as people battle to take control. The Guardian noted, just as with the death of Escobar, little appears to have changed in drug circles except a shift in trafficking routes.

One million school children left behind because of poverty