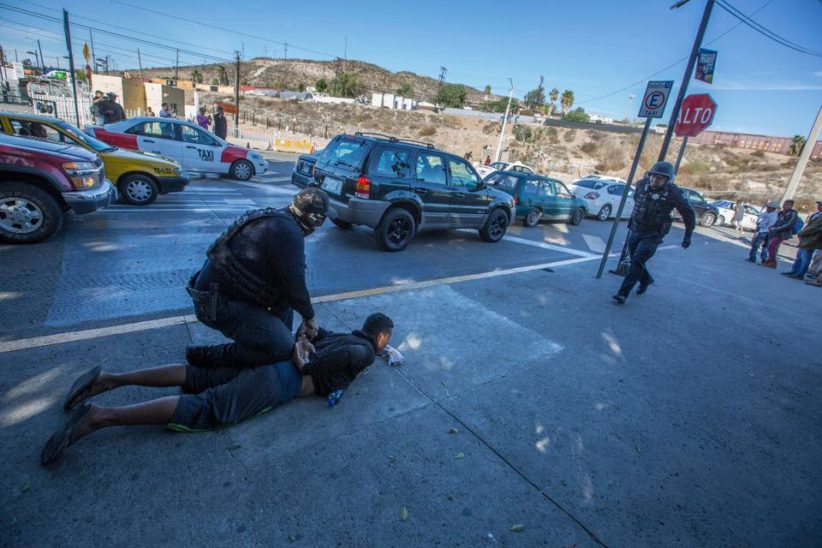 A peaceful march in Tijuana saw 39 migrants arrested by local authorities after the protest turned into chaos.

According to local reports, U.S border troops began firing tear gas at the hundreds of Hondurans walking close to the at the fences as a result of some migrants attempting to breach the U.S border illegally.

It follows a tense weekend for the migrant caravan, which saw the closure of San Ysidro, the two countries busiest border crossing and ongoing concerns about anti-migrant protests from Mexican citizens in the northern city of Tijuana. What’s more, the Mayor of Tijuana has declared a ‘humanitarian crisis’ on the border as the Latino country struggles to support the vast influx of people in the city. Although the Migrant Caravan never spent much longer than a few days in the majority of stops along the route, some believe that the migrants could be looking at months of waiting in Tijuana.

Whilst speaking to BuzzFeed News recently, the former director of the US Citizenship and Immigration Services agency, León Rodriguez, was quoted as pointing out the increased force being used by U.S Border Security was “a foreseeable result of the US policy of placing every conceivable obstacle in the way of orderly legal migration and of not having a policy that [recognizes] the desperate circumstances driving migration.”

READ MORE:  ”No To The Invasion” Mexicans protest against the migrant caravan in Tijuana

Some 5,000 migrants have now made a Tijuana sports centre their temporary home as their wait to gain asylum in the United States. It is here they can receive food handouts whilst the Mexican authorities struggle to support a large number of mainly Hondurans hoping to gain access across the northern border legally. The Associated Press has pointed out that as little as 100 asylum applications are being processed by the US border officials every day.

As well as the 39 migrants who were detained following yesterday’s violence, Mexican state officials have counted that up to 11,000 Central American migrants have been deported back to their countries since October 19, the date at which the migrant caravan began.

Despite this staggering number, just a reported 1906 of those deportees came from the caravan, whilst many other have chosen to return themselves.

Although the US president continues to rally fear around the migrant caravan, suggesting most of them are hardened criminals, the reality is that the group of men, women and children left their countries with little belongings in fear of criminal violence and organised crime. They have travelled thousands of miles, mostly by foot, in a bid to gain entry to the United States despite the country’s fear mongering.

By the end of 2018, it is believed that Mexico would have deported up to 100,000 Central Americans back to their countries this year alone.