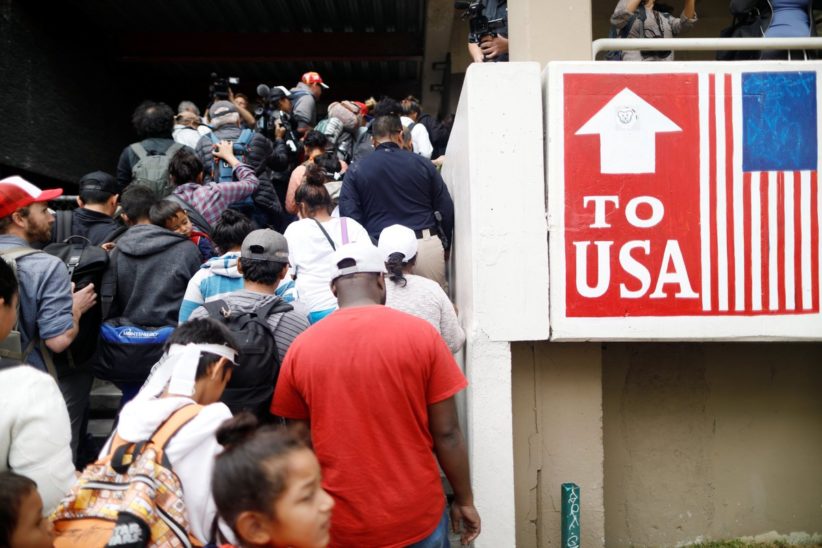 A group of protesters in Tijuana, Baja California, gathered yesterday to rally against the migrant caravan that is currently travelling through the city.

According to local reports, the protesters shouted phrases such as ‘‘no to the invasion,’’ and ‘‘first Mexico’’ as they expressed frustrations at the migrant movement.

The Sunday protest had gathered at the Cuauhtemoc monument in Tijuana, which runs along the northern border of Mexico. Waving Mexican flags, the group then proceeded to walk through the city’s streets before being stopped by municipal police whilst on their way to a temporary migrant shelter.

The Associated Press has identified that almost 3,000 migrants have reached Tijuana so far, however thousands more are expected to arrive shortly as the different parts of the caravan finally reach the border city. Of those already in Tijuana, over 2,000 are staying in a crowded hostel whilst others have found shelter in numerous pop-up camps. As security along the border continues to tighten as a result of U.S orders, it is expected that the migrants will face several more months of waiting as they seek asylum in the United States.

The protesters have accused the migrants of being messy and also called upon the Mexican government to carry out security checks in order to ensure there are no criminals among the group.

Photos also reveal that some of the protesters began to be violent towards the police that had been put there to protect the migrants and halt the protest.

Although the protest was eventually disbanded, the nationalist sentiments of some Tijuana residents were also countered by another protest which was being held in support of the migrant caravan. Not too far from the anti-migrant march, others in the city have noted that they have faced no problems with the migrants.

READ MORE: At least 100 Migrants Travelling In The Caravan Feared Kidnapped By Cartels

Since the migrant caravan came into the media spotlight last month, following numerous speeches from Donald Trump, the migrants have faced relentless struggles in their march north. Many claim violence and poverty are the main reasons they are being forced to leave their countries. Despite increased efforts to dissuade migration, a  recent study also revealed that 95% of those forcibly returned to their country try and cross the border into the United States again. The risky vicious cycle of searching for a better life and fleeing from persecution continues.

Although clashes with police have left at least one migrant dead along the route, as well as other reports suggesting some migrants could have been kidnapped by cartel members, the large majority of people continue to walk towards the border despite no guarantee of being allowed into the United States.

It is believed that 1,800 migrants mainly from Honduras have already left the caravan and returned to their country.