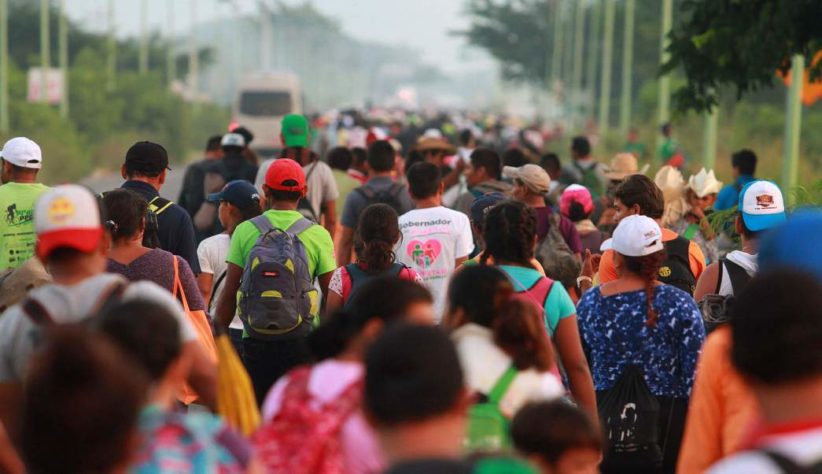 As many as 100 individuals who have been part of the migrant caravan currently making its way through Mexico are believed to have been kidnapped and handed over to local cartels.

At the same time as some 2,000 migrants finally, trickle into the capital, early reports suggest that men, women and children have been taken by organised crime groups, despite many opting to join the migrant caravan in order to enhance security.

The claims have been made by Arturo Peimbert, who is head of the Ombudsman for Human Rights of the People of Oaxaca. In an interview with HuffPost Mexico, the activist claims that he had gathered the testimony of a number of witnesses who explain that the kidnap took place close to Puebla, located just a few hours away from Mexico City.

According to eyewitnesses who spoke to Peimbert, two suspicious vehicles, believed to be helping migrants, took them away.

Released just half a day before the US midterm elections, in which the Migrant Caravan has played quite an important role for campaigning, the report goes on to suggest that the disappearances come alongside increased pressure from authorities to not support the migrant movement. It has recently been alleged that state authorities have dissuaded people and vehicles from helping the migrants, which could have come as a result of increased pressure on Mexican and US relations. As a result, however, the movement has been more prone to succumbing to organised crime groups – in this case, believed to be Los Zetas.

Alongside Venezuela’s humanitarian crisis and the heightened violence across Central America, high rates of unemployment and poverty have all contributed to the choice which has seen many leave their homes behind. Many claim organised crime and violence are the main reasons they are being forced to leave their countries. Despite increased efforts to dissuade migration, a recent study revealed that 95% of those forcibly returned to their country try and cross the border into the United States again. The risky vicious cycle of searching for a better life and fleeing from persecution continues.

Migrant trafficking routes continue to represent an incredibly dangerous process, however, a number of Central Americans feel there is little choice than to undergo the trip. Amidst rising crime rates and plummeting economies that force people from their homes, further violence awaits migrants who jump onto moving trains and risk being captured by cartels such as the Zetas or even organ trade traffickers. Last year, ten migrants were reported to have suffocated in the back of a truck when there was no air to breathe, however, many more incidents go unreported. Jumping on trains is considered extremely dangerous, and can also provoke attacks whilst on board, causing most women and children to steer away from it.

It is a terrifying reality that has led many to seek strength in numbers within the migrant caravan. The disappearance, however, will also bring into question the effects that governments are having over the protection of people currently enduring the journey. It is believed that two people have already died whilst en route, one killed by a rubber bullet, and just a few days ago the first migrant caravan baby was born.

The common denominator between the forced movement of citizens across Latin America appears to be cartel control. Governmental failures in the migrants’ own countries continue to push people to use these perilous routes and, as a result, risk falling into the hands of organised crime leaders.

In this case, however, it is unclear what has happened to the migrants or who is exactly taking the blame for the missing people. It comes at a time of increased organised crime violence within Mexico, which has seen a number of splinter groups resort to kidnapping and then extortion – the victims usually end up in clandestine graves regardless of if a ransom is paid or not.

Mexico’s human rights faliures to be assessed by UN countries