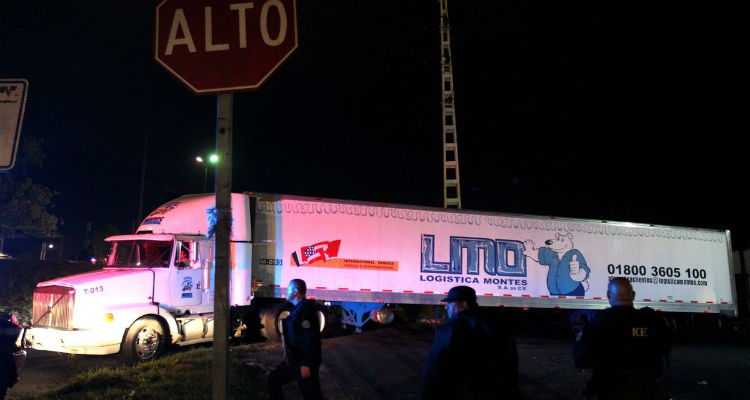 One month ago, Guadalajara’s forensic organisation made headlines for the mystery surrounding a refrigerated truck that was being used as a mobile morgue, which also kept being left in unusual locations.

Since the story broke, head of the forensic department Luis Octavio Cotero lost his job yet a number of further grizzly discoveries have since been revealed in relation to the case, which outraged Guadalajara residents.

Although statements suggest the truck had been used by forensic officials for nearly two years and parked at the morgue, attention was drawn to it last month after it mysteriously moved around various locations in the state. According to Reuters, the large refrigerated trailer was seen in Tlaquepaque and Tonalá on the outskirts of Guadalajara and had been subject to a number of claims that it was parked illegally and abandoned. It was then moved to another field, however, local residents immediately complained about the odours coming from the truck.

The apparent short-term solution for storing Jalisco’s deceased came as a result of overwhelming murder rates across the state due to organised crime conflicts. Although considered one of Mexico’s most dangerous states, the trend appears to be nationwide, reflected in the rate of killings across the country which have ramped up to 20.51 per 100,000 inhabitants, a record high.

The Jalisco Institute of Forensic Sciences is where the bodies should, in fact, have been stored. It’s 80- person capacity has maxed out according to local reports and on top of this, a forensic pantheon in the Coyula cemetery has also received up to 150 corpses, meaning that burial space has also reached capacity.

This month’s subsequent investigation into the truck, of which citizens later discovered there were actually two, suggested that a number of the 157 bodies were decomposing and left in a bad state which led to the complaints from suspecting neighbours, as the trucks freezer system failed to cover the odour.

On top of this, according to Mexican news publication Milenio, the former forensic director has both denied that he is responsible for the use of the trucks and instead pointed the blame at the prosecution team, then run by Raúl Sánchez, who rented several trailers to move and store the bodies. With a 20,000 peso (US$ 1,000) weekly renting fee, the scope of Mexico’s overflowing morgue crisis is a direct reflection of rising violence across the country.

It was then that it was revealed that there is already, in fact, some 16 such refrigerated trucks being used across the country. Los tráileres de la muerte (the trailers of death) as they have been coined have been identified in Guerrero, Acapulco, Chilpancingo and Iguala while their counterparts in Veracruz and Tijuana, Baja California.

The controversial storage systems continue to bring the country’s level of impunity into the limelight. Not only do more states continue to struggle with overflowing morgues, but little also appears to have been effectively done to bring those to justice for the murders. This is now merely accentuated by the array of victims, whose remains continue to decompose in trucks not designed for this purpose.