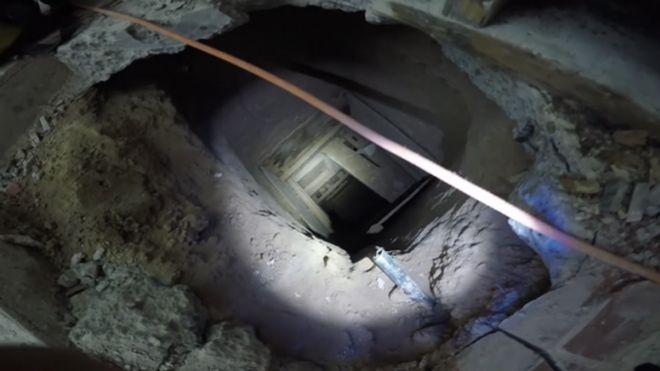 US Homeland Security has uncovered an underground tunnel system which was being used to funnel drugs across the Mexican border. The tunnel stretched over 180 metres from the basement of fast food restaurant, KFC, in Arizona to a building in Mexico and is believed to have been used by a Mexican cartel.

According to local reports, authorities had begun to track the location of the Arizona building owner, Ivan Lopez for almost a month before the actual discovery was made. Having uncovered over $1 million worth of narcotics in Lopez’ possession, including methamphetamine, cocaine, heroin, and fentanyl during a traffic stop, a search of his other possessions and building ownerships eventually led to the uncovering of the tunnel.

The tunnel, which left from the kitchen of an unused KFC, was 22ft deep, 5tf tall and 3ft wide, reported the BBC, and  included a system where rope was used to pull the drugs under the border. At the other end, the tunnel was concealed in Mexico by a trap door under a bed in a residential property.

Ivan Lopez had, in fact, owned the property since April of this year, however it remains uncertain how long the tunnel had been in use for. The accused has since been linked to cartel involvement and has  remained in federal detention without bail since last week.

It is certainly not the first time that a tunnel system has been uncovered with links to the movement of illegal narcotics, and it has remained a pressing issue in the ongoing, and increased, the war against drugs waged by the neighbouring countries. According to the Independent, some 200 underground access routes have been discovered in the past 30 years alone, some as long as half a mile in length. What’s more, critics of Trump’s ‘wall’ suggest that this would merely push organised crime groups further underground; and, in fact, does not offer any solution to the booming drugs trade.

A tunnel of this stature and similar, yet much longer underground systems that have been previously uncovered cost thousands of pounds and a considerable amount of time to construct. However, this amount pales in comparison to the amount of money that is brought in on a daily basis from the illegal drug trade. It was reported for instance that in July 2018, United States authorities had managed to collect 15kg of heroin, 24lbs of cocaine, 327kg of methamphetamine and 1,900kg of marijuana at US  borders. That amount itself pales even more in comparison to the amount that successfully makes it through the borders and into the US black market.

The news comes a little under a week since new agreements were made by US and Mexican authorities who have promised to work closer in stemming the problem of organised crime and the drug trade which funds them. In reality, the larger issue of international demand for drugs, however, is yet another battle that must be addressed.

”There is no indication that it is a progressive government.” The Zapatistas criticise AMLO