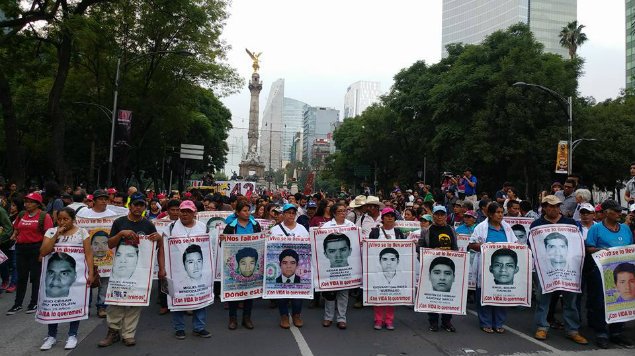 Violence rates in Mexico continue to soar, with this year predicted to be the bloodiest on record for murder rates amongst other criminal activity. It is the result of heightened organised crime links, failing police and legal systems and an abundance of corruption within the policial system, all of which incoming President AMLO promises to change dramatically.

However, amongst the media cries and gruesome headlines that often precedence in Mexico, patiently await a plethora of parents and family members who eagerly continue to campaign for justice and information about missing loved ones. This heartfelt cry was accentuated yesterday as it marked the International Day of Disappeared people across the globe. Although an international ‘memoriam’ it resonated a lot more in the Mexican states where kidnappings are reaching record highs.

It was also on this day that Mexican President Enrique Peña Nieto released a statement on the matter of kidnappings and touched upon the case of 43 missing students in Ayotzinapa, Mexico. During the statement, he claimed to suggest that the whereabouts of the student’s remains are known.

The high-profile Mexican case links to the controversial disappearance of 43 students in September 2014. Though many details of the event remain unknown to this day, students from the Rural School of Ayotzinapa were commemorating a 1986 student massacre when events quickly unravelled and the students were attacked, with 43 kidnapped.  Their whereabouts remain unknown although many presume they have been murdered.

The orchestrators of the attack initially pointed to local police who have been connected to criminal organisations, however, eye-witness accounts also suggest other areas of Mexican security, police and military were involved. Many have suggested that the students were eventually passed into the hands of guerrillas. Since 2014, stories of the viciousness of the student attack have grown and a number of mass graves have been located, but the students’ remains have not been identified. The Party of the Democratic Revolution’s reputation has been heavily tarnished over the incident with international outcry at the failure of the Mexican state to bring justice upon the crime.

Branded a crime against humanity, the disappearance and apparent cover-ups from leading players called into question the former government’s ability to control crime in a country rife with corruption.

The Argentine Forensic Anthropology Team (EAAF) has since slammed claims from the Mexican President Enrique Peña Nieto that falsely revealing this information.

For 34 years, the Argentine organisation has been working relentlessly alongside the families of missing people across the globe and have contributed to the search and identification of a number of bodies before supporting the restitution of human remains. Some of the cases with which they have been involved saw EAAF Anthropologists Patricia Bernardi, Mercedes Doretti and Silvana Turner exhume the remains of the victims of  El Mozote, where 800 civilians were killed in El Salvador, addressing some of the greatest massacres in Latin America’s recent history.

The EAAF outright condemned the video as false and have since pointed out that there is no scientific evidence whatsoever that the remains of the students are where the President stated. The Argentine organisation further reiterated its support for the families of the missing students and promised to support the path to justice for the crime.

Enrique Peña Nieto is yet to comment on the backlash to yesterday’s statement.

The Argentine NGO continues to rally support for the families of victims around the world. From the oppressive military regimes that stole thousands of Chileans and Argentines, to the current crisis of organised crime abductions occuring in Mexico, the search for missing people is ongoing, sometimes painful but a necessity in the fight against oppression.