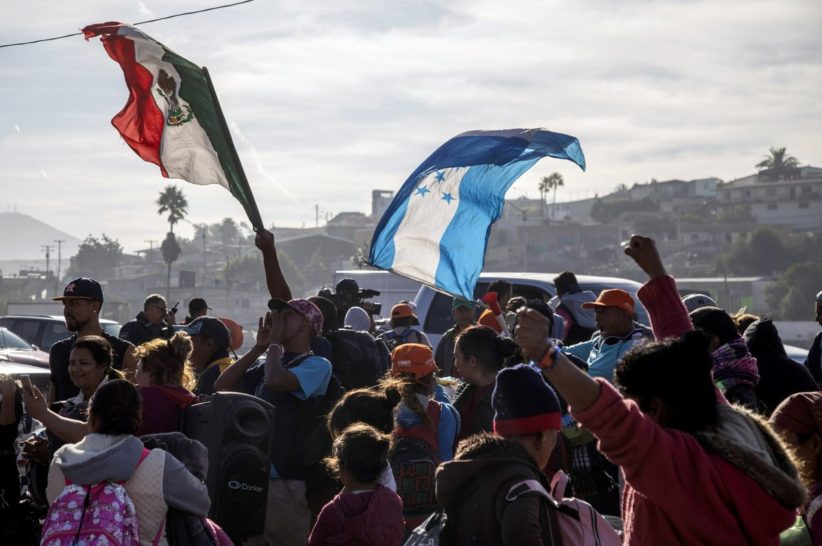 On Monday 14, a new migrant caravan consisting of hundreds of people was spotted embarking from San Pedro de Sula in the north of Honduras.

With very few belongings, and some draping a Guatemalan flag over their shoulders, in front of them lies nearly 4000 kilometres on foot in order to reach the increasingly hostile southern border of the United States.

It is the first ‘official’ migrant caravan of the new year, coming off the back of several large scale movements at the end of 2018 which saw an estimated 6,000 migrants take the march north. Of the ones that made it to the Mexico’s northern border town of Tijuana, as many as 2,500 migrants are still waiting for asylum claims to be processed in order to gain access to the country.

Alongside Venezuela’s humanitarian crisis and the heightened violence in Nicaragua that is forcing citizens to leave, high rates of unemployment across Central America have meant that people have been left with little choice but to leave. Organised crime groups, violence, poverty and fearing for their lives, the migrants make up an cluster of people whose their government has failed to protect them.

Despite increased efforts to dissuade migration, a study revealed that 95% of those forcibly returned to their country try and cross the border into the United States again. The risky vicious cycle of searching for a better life and fleeing from persecution continues, though at this point it is unclear how many members of the 2018 migrant caravan have chosen to try and undertake the route again.

What became increasingly clear last year, is that although the migrant caravan offers strength in numbers, the journey through Guatemala and Mexico is increasingly difficult. Last year reports arose of one migrant being hit by a rubber bullet whilst trying to cross into Mexico, leading to his eventual death. The mystery surrounding as many as 100 migrant men, women and children who disappeared whilst travelling through Mexico are believed linked to cartel members, who are thought to have kidnapped the migrants.

To add to this, in 2017 ten migrants were reported to have suffocated in the back of a truck, however, many more incidents regarding cartel groups go unreported. Jumping on trains has been considered very dangerous, and can also provoke attacks whilst on board, causing most women and children to steer away from it. This, however, does not prevent it from happening.

Mexican authorities also recently revealed plans to strengthen their southern border in the anticipation of further migrant caravans. Detailing new specifications under which Hondurans will be allowed into the country, in 2018 many had already raised questions about the creation of Mexican ‘detention centres’ which were being passed off as shelters.

Although many consider this a humanitarian crisis and strive to help the migrants, other reports from Tijuana also spoke of a nationalistic rise against the migrants as protesters accused the migrants of being messy and called upon the Mexican government to carry out security checks in order to ensure there are no criminals among the group.

The Honduran ambassador to Mexico has been one of a number of authorities to urge against joining the new migrant caravan. Citing the decision to leave as ‘crazy’, the BBC quoted him: “I ask you from my heart, as a Honduran brother, to analyze what happened to the members of the first caravan.”

Whilst a new caravan begins to gather momentum, what awaits is a perilous journey and an erratic U.S leader who, last time, deployed military forces to deter the migrants from crossing. Despite this, the U.S government remains shut down and there are no signs that a border wall will ever be constructed, nor would it even deter desperate people wanting to better their lives.