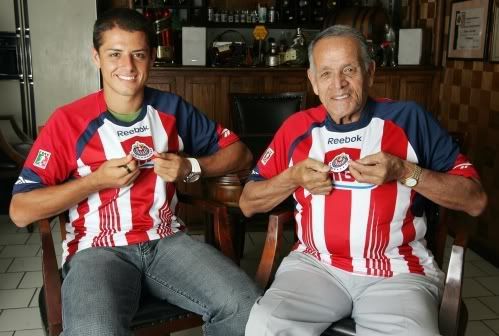 After recently celebrating his 30th birthday, Javier Hernández may well have taken a moment to look back on a glittering career which has seen him become Mexico’s all-time top scorer and number one footballing icon.

Hernández, whose jersey sports his nickname Chicharito, was born into a footballing family in Guadalajara on 1st June 1988. He began playing football as a child and at the age of nine joined Chivas de Guadalajara as a youth player, following in the footsteps of his grandfather Tomás Balcázar, a legendary player known as the Campeonísimo (‘the ultimate champion’) who won eight league titles with Chivas between 1948 and 1958 and scored for Mexico in the 1954 World Cup. His father, Javier Hernández, who played professionally for several Mexican clubs and represented the national team during the 1986 World Cup in Mexico, was known as “El Chicharo” (“the pea”) due to his small physique and green eyes. Hernández Jr. acquired the nickname Chicharito, meaning “little pea”, as he shares his father’s physical attributes and due to his baby-face.

Speaking to Bundesliga.com, Hernández recalls his football-obsessed childhood: “Almost all of my memories from a young age involve football in the stadium, either watching my dad play or just being there with my family. Obviously, I’d wear my dad’s shirt when I was a kid, too. Football, and everything about it, has always dominated my life”.

Despite his childhood ambitions and his family’s footballing pedigree, Hernández struggled to break into the Chivas first team after signing his first professional contract in 2006 and at one point considered changing career paths. But Chicharito, known for his patience and tireless work ethic, eventually made his mark by scoring 26 goals in 64 appearances for Chivas, drawing attention from a host of European clubs.

Eventually, it was Manchester United who captured the rising star, Hernández joining the Red Devils in summer 2010, a move which served as the catalyst for a sparkling career defined by his lethal finishing in front goal.

Immediately after arriving in England Hernández played in the 2010 Charity Shield final, scoring his first goal in a Manchester United shirt and helping the club seal a 3-1 victory. That season, he went on to win the English Premier League title (2010/11), scoring 13 goals in 27 appearances in the process and winning the prestigious Sir Matt Busby Player of the Year Award. He also became the first Mexican player to play in the final of the UEFA Champions league, which United lost 3-1 to Barcelona.

That summer he produced an outstanding performance in the 2011 CONCACAF Gold Cup, netting seven goals in six games and winning both the Golden Boot and Best Player award as Mexico beat the USA to win the tournament.

In subsequent seasons with United Chicharito won a second league title and other trophies, although his goal-scoring form dipped and he eventually struggled for a first-team spot. In 2014 he spent the season on loan to Real Madrid, where he netted an impressive seven goals in 23 appearances despite struggling to start.

In search of more playing time, Chicharito transferred to Bundesliga side Bayer Leverkusen, in August 2015, a move which saw him regain his blistering form in front of goal and score 28 goals in 54 appearances. In July 2017, Hernández returned to English football, signing for West Ham United and citing his ambition to “show I can achieve the things I dream of”. Yet the striker managed just eight goals in his first season back in the Premier League, raising questions about his future at the club.

At the international level, Chicharito is El Tri’s all-time top scorer, having netted 50 goals for his country in 106 appearances, most recently during Mexico’s 2-1 victory against South Korea in the 2018 World Cup. Hernández notably scored his World Cup goal against France, in South Africa in 2010, almost exactly 56 years after his grandfather netted against Les Blues in the 1954 World Cup. He again won the CONCACAF Gold Cup with Mexico in 2015.

Hernández is renowned for his prowess in the box, often scoring from close range, as well as his acute spatial awareness and his ability to read the game.

Indeed, the striker places a great emphasis on off-the-ball movement, as noted in a 2016 interview with Sports Illustrated. “If you’re inside the box and a cross is coming, sometimes you need, as we say in Spanish, to smell the intuition, to smell where the cross is going”, he said. “You play this sport in the mind, not only on the field. On crosses, sometimes I make my move one or two seconds before the ball is coming because I’m trying to guess that the ball is coming there. It’s intuition. So I run. Sometimes the ball comes…sometimes not. But that intuition is working.”

Over time Hernández has developed into a well-rounded team-player, who also tracks back to help teammates. His playing style has drawn praise from his peers, such as Bayer Leverkusen director of football and German legend Rudi Völler, who cites his “incredible sense of where the ball will end up”.

Despite his recent struggles for goals in the Premier League, there is no doubt that Chicharito will remain a Mexican legend for years to come. Immensely popular among Mexicans who identify with his quiet and hardworking nature, Hernández is a PR icon and since 2012 has been an ambassador for UNICEF. His playing future may be unclear, but his reputation as one of Mexico’s finest exports isn’t going anywhere.

Murder in Veracruz: Is enough being done to protect Mexico’s transgender community?