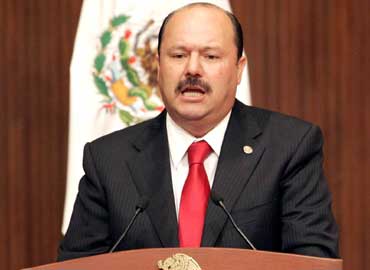 An exhibition in Mexico City called Expo impunidad. El saqueo (Impunity Expo: The Looting) has been halted following the ruling of a federal court.

The impunity expo, geared at showcasing the corruptions and dodgy dealings of former Chihuahua governor Cesar Duarte, was deemed as compromising to the ex-governor’s right to be presumed innocent until proven guilty and is claimed to be damaging to the ongoing investigations into his time in government.

Duarte was governor of the state of Chihuahua between the years of 2010 and 2016 and was part of the PRI political party. Among allegations of mishandling public money and buying several ranches, the former governor is accused of stealing hundreds of cows that were bought with public funds. The cows were meant to be given to small ranches in Chihuahua in a bid to support farming communities.

Embezzlement was another accusation that revealed the governor was involved in the mishandling of up to US $4.2 million and moving it around his party accounts.

Despite suggestions that he was being protected by authorities in the PRI party, the former governor fled the country to avoid criminal charges. He continues to be a fugitive and is believed to be in the United States.

Since his disappearance, two Interpol notices have also been launched against him but he has managed to avoid arrest.

The new exhibition into the former governor’s dealings was opened in November in the leafy area of Roma, Mexico City. Inaugurated by the current Chihuahua governor, Javier Corral, the exposition revealed photographs, videos and reports into the scope of the investigation and how far-reaching Duarte’s illicit activities went. Corral has made Duarte’s case a key focus of his government role and continues to call on his predecessor to be brought to justice in the state. The current governor also recently came forward and called out the new president’s plan to pardon and forgive criminals or people involved with corruption as incongruous, explaining that it is, in fact, the responsibility of politicians to carry out the rule of law.

The current governor allegedly believed that former Mexican president Enrique Pena Nieto was involved with protecting the governor. Although the party has now left power, following the inauguration of AMLO just this past weekend, Pena Nieto and other members of his inner government were exempt from the Chihuahua corruption investigation and their actions will not be probed as a result of a Supreme Court ruling.

Despite the accumulating evidence against Duarte, the ‘Impunity Expo’ will be forced to close following the recent judicial ruling.

File 1383/2018 decrees that the ex-politicians rights will be protected and the expo provisionally suspended because it challenges his reputation in light of the criminal case.  The court ruling went on to explain that the exhibition exposes an unfavourable image of the man in question and this could have negative effects on the process of the case against him.

The lavish lifestyle and exposed corruptions of Duarte are just one element of a number of PRI politicians currently being investigated. Javier Duarte, ex-Governor of Veracruz, was recently slammed for countless corruptions during his time in office, and ex-governor of Tamaulipas, Tomás Yarrington, was also arrested two years ago after being on the run in Italy. Today’s news, however, comes just hours after local newspapers announce that an ex-official from Javier Duarte’s state government in Veracruz has just been released from prison despite allegations of corruption.