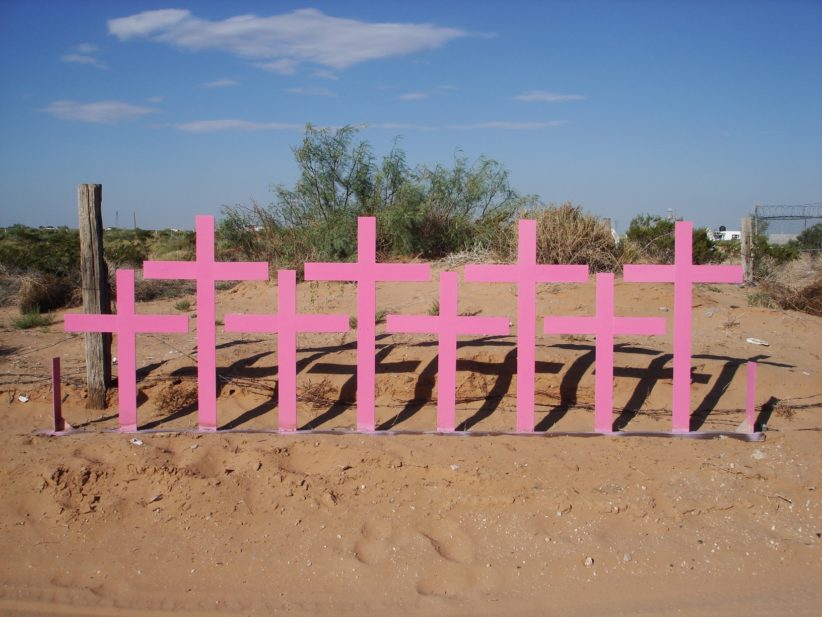 The presidency of Enrique Peña Nieto, set to leave office at the end of this week, has allowed for the worst levels of violence against women claim protesters who took to the streets of the capital yesterday.

This Sunday marked an International Day for the Elimination of Violence against Women, and saw the peaceful protest decorate the Mother’s Monument with pink crosses in remembrance of ongoing the violence and disappearances of women across the country.

Carrying slogans such as “it was not suicide, it was femicide,” a number of relatives of victims also participated in the protest reported Animal Politico.

Mother of the murder victim, Mariana Lima, killed in the State of Mexico in 2010, then took to the microphone and called out the government for vast failures in protections against civilians. “Public policies and bodies responsible for preventing, addressing, investigating and punishing violence against women have been inefficient … instead of guaranteeing access to justice, (they) obstruct it. They are negligent and ignorant, as the Supreme Court of Justice of the Nation acknowledged in Mariana Lima’s ruling, issued in March 2015. “

The term Femicide has been frequented more in Mexico recently and specifically looks at killings of women as a direct result of their gender. According to Global Citizen, who conducted a study alongside UN Women and the National Women’s Institute, reports of violence against women have almost doubled since 2007 across Mexico; and are usually attacks orchestrated to demonstrate ‘relationships of power.’  Many of the attacks take place in or around the victim’s residence, and many are also associated with Mexico’s northern states who are experiencing the worst bouts of organised crime is more prevalent.

There was a reported total of 168 cases of femicide across Mexico last year alone, however that figure is anticipated to rise. Many of the reports of violence speak of beatings, suffocation, burns and mutilation among others as an environment of impunity sees little justice brought to the cases.

The report continues, 105 of the victims were found on public roads, 45 in homes, 33 in workplaces and 3 in cars. The brutal and usually public elements of these murders add to the femicide element and reveal a society that is still relentlessly battling gender aggression. What’s more, it is believed that there is an increased brutality occurring in the attacks, and little justice has been found.

In the state of Guanajuato, for instance, 200 women were killed between January and August of this year – which was the same number the state had experienced in the whole of 2017. There are now also 11 municipalities in Mexico that have released an Alert for Gender Violence, due to the sheer amount of reported aggression in those areas.

Though there have been steps to increase the sentences on cases of femicide, many of the attacks go both unreported and unsolved. Mexico remains alongside the other 13 Latin American countries out of the 25 which have recorded the highest levels of femicide throughout the continent.

The outgoing government has been accused on several occasions of failing to protect it citizens and will leave a legacy of some of the highest murder rates in the country’s history when the Morena party comes into official power on December 1.

Peaceful protest descends into chaos at the Tijuana border