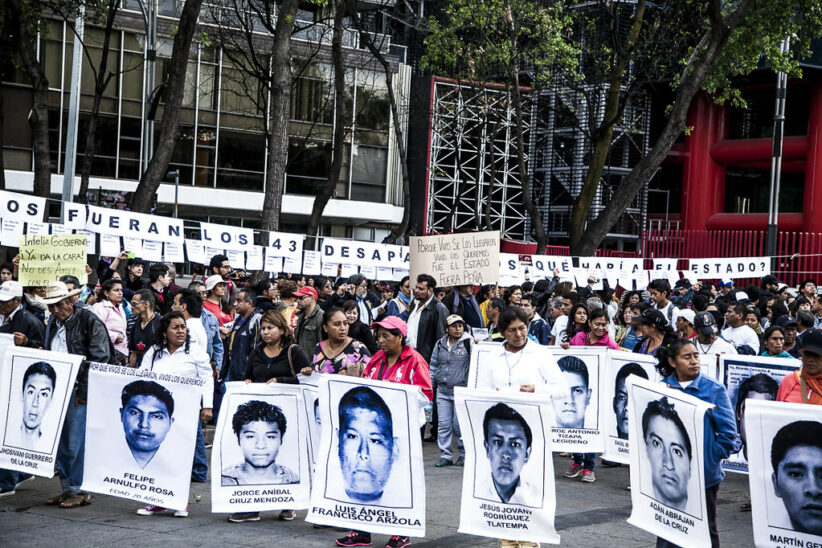 Protest for the 43 students disappeared in Guerrero, Mexico. Image courtesy of ISABEL SANGINÉS/SOMOSELMEDIO.ORG

Undersecretary of Human Rights Alejandro Encinas Rodríguez, who is leading a special commission looking into the disappearance of 43 Mexican students in the state of Guerrero in 2014, accused Mexico’s judiciary of hindering the investigation.

Through a statement issued by the Ministry of Interior on Wednesday, Mr. Encinas denounced alleged hampering by federal judges who dismissed the charges on two members of the criminal organization ‘Los Tilos’ suspected to be involved in the students’ disappearance.

According to Judge Enrique Beltrán Santes, since both suspects were already tried and acquitted for the same charges years ago, it is impossible to try them again under the same pretenses.

Mr. Encinas argues that the initial dismissal of their case was due to a lack of convincing evidence and not a final resolution that exonerated them.

“The accusation against ‘Los Tilos’ is supported by solid evidence. However, the Federal Judiciary prevents access to truth and justice for the victims and continues to hinder the results of an investigation whose line is to solve the disappearance of the 43 students, locate their whereabouts and bring the perpetrators to justice.”

In early May, the Undersecretary of Public Security, Ricardo Mejía, announced the apprehension of a member of the criminal organization ‘Guerreros Unidos’ and ‘Los Tilos,’ Salvador N, on charges of being involved in organized crime, forced disappearance, and his participation in the disappearance of the 43 students.

On the night of September 26, 2014, different attacks coordinated by local police and armed groups in Iguala, Guerrero, resulted in the death of five students and three other non-student civilians,  and the disappearance of 43 students from Ayotzinapa, a school for teachers.

At the time, outrage surrounding the mass disappearance of the students grew as reports came in about alleged collusion between local authorities and organized crime groups who allegedly disappeared the students after their encounter with law enforcement.

In January 2015, then-Attorney General Jesús Murillo Karam, closed the investigation on the disappeared students and arrested then mayor of Iguala, José Luis Abarca Velázquez, and his wife, María de Los Ángeles Pineda Villa, accusing them of being the intellectual authors behind the crime.

This rendition of the events, infamously dubbed “The historical truth,” stated that neither the military nor any other federal force was involved in the crime. It also named Mr. Abarca and his wife as leaders of “Guerreros Unidos” and said they gave the order to the police to deliver the students to the criminal organization who then murdered and allegedly incinerated their remains in a dump.

The historical truth was met with controversy, with family members of the victims rejecting the findings.

The Interdisciplinary Group of Independent Experts (GIEI), the special investigative group doing independent research on the events, as well as a group of Argentine forensic experts hired to carry out the investigation, dismissed the official government version.

Arturo Zaldívar, the president of Mexico’s Supreme Court, fired back at Mr. Encinas’ comments on Wednesday, saying that it was not correct to disparage the judiciary system in the face of a decision.

However, Mr. Zaldívar did mention that the use of torture to draw confessions from alleged witnesses of the crime is well documented, acknowledging irregularities in the investigation.

Around 40 videos document different forms of torture used by the commander of the now-defunct Center of Investigation and National Security (CISEN), Tomás Zeron. Mr. Zeron is currently in exile in Israel with Mexican authorities working towards his extradition to prosecute him for his involvement in torture and corruption during the investigation.

Other revelations point to government mismanagement or even a potential cover up in the investigation of the disappeared students.

According to a March report from the Inter-American Commission on Human Rights, the Mexican Navy played an active part in manipulating evidence in the case.

The report disclosed that drone images and documentation guarded by the armed forces for six years placed members of the Navy transporting “three white bundles”  with unknown contents to the dump where the charred remains of the students were found.

“The Navy elements manipulate packages that they take out of two pickup trucks, three packages are seen in the upper part of the garbage dump. Subsequently, a group of Navy elements descend to the bottom of the dump. While they light a bonfire at the beginning of the slope,” the report read.