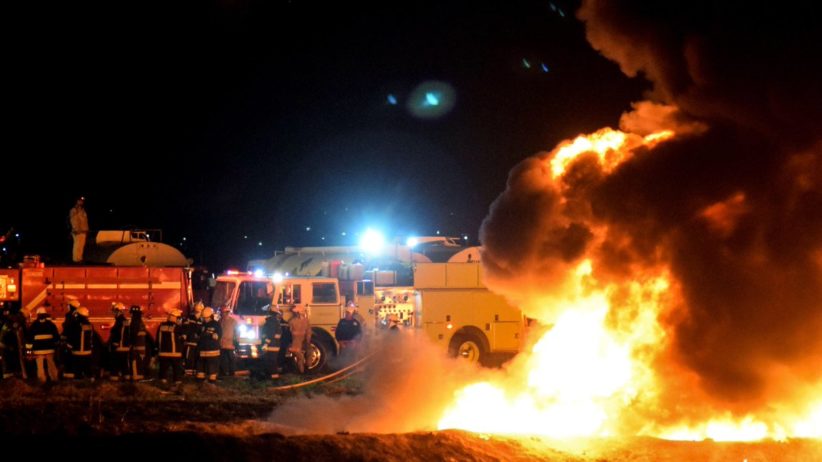 Mexico’s Federal Police, Secretary of National Defence, Pemex and local law enforcement in Hidalgo are all to come under scrutiny to determine if anyone was to blame for last week’s explosion that killed 91 people.

The tragedy is the deadliest incident to hit the state-run petroleum company in years and comes at a time of increased pressure across the country due to ongoing fuel shortages. According to reports of the incident which took place in Tlahuelilpan, Hidalgo, hundreds of locals had rushed to collect fuel that was gushing from a pipe that had been punctured by suspected thieves when the explosion took place on Friday

“For many like me, who do not finish high school, the huachicoleros [fuel thieves]  also generate employment for poor families. Politicians do not suffer from the shortcomings that we suffer, and we are not going to buy gas at 20 pesos, because it does not reach us” a local eye witness recently told Animal Politico.

There are suggestions that the tragedy is a result of the country’s fuel shortage, and the prospect of free fuel caused a rush to the pump for residents in the area, and people further afield.

Although many citizens have expressed that the current fuel shortages are necessary, the recent government clampdown is taking its toll on a number of towns and cities where, after hours of queuing, petrol stations are running dry. The situation appears to become worse for rural communities where there appears to be more of a dependence on illicit fuel sales, which has led to a number of less serious fires in regions across Mexico.

Speaking to national newspaper Reforma, another eyewitness explained what happened when the leaking fuel source exploded. “When it exploded there was an average of 30 people inside the ditch,’’ he said. ‘‘The first to receive the impact were two boys… [and] there were ladies, children, and at the moment we all began to run terrified.”

Since Friday’s tragedy, the prosecutor’s office has kept all channels of investigation open, as well as looking into whether organised crime groups were involved. So far 12 interviews have been conducted with government authorities as they attempt to understand the cause behind the fire. On Saturday, Mexico’s president Andres Manuel Lopez Obrador also visited the site and vowed to bring an end to organised crime theft linked to fuel.

At the time of writing, just nine people had been identified amongst the deceased, and even less had been returned to their families. A further 66 injured people remained hospitalised over the weekend.

What leads cartels to steal fuel is the opportunity to profit from a less complex industry than that of narcotics. Rather than having to move drugs overseas, the stolen fuel can be profited from within Mexico and allows for cartels to become more powerful with greater ease. In the space of just four years, the number of oil thefts had quadrupled by 2016 and following on from the splinters occurring in Mexico’s most notorious cartel organisations, the amount of smaller gangs looking to make money continues to grow.