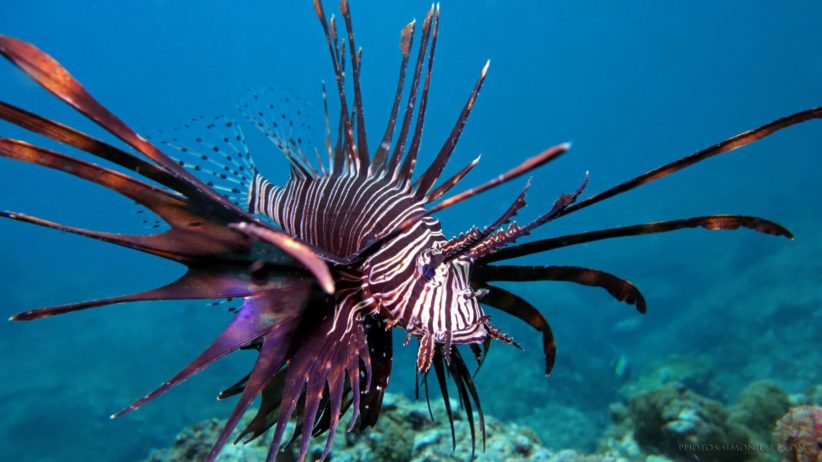 They came armed, and they came hungry. The beautifully-striped but venomous pez léon, or lionfish, has spread from the US to the Gulf of Mexico and Yucatán Peninsula. With zero local enemies but a huge appetite, the fish is widely condemned as posing significant danger to native species.

Coincidentally, migration at the US-Mexican border seems to have sunk last year another inch deeper into the murky waters of political aggression and ugly debate. Yet the crystalline turquoise of the Caribbean Sea tell a very different story on how to manage a new intruder. How and why should the lionfish be fought – and what surprising lessons does it offer?

“They are like the cockroaches of the sea”. Michelle Johnston, a sanctuary research biologist in the US, lists many reasons why conservationists are concerned about the Pez Léon in a recent interview.  “They reproduce every four days and every four days they can release up to 50,000 eggs. Plus, nothing really eats them, they have venomous spines and the native fish are terrified of them.”

Running (or diving) into a Pez Léon can be a rather thrilling experience for humans, too. The 16 long spines majestically growing out of their zebra-striped bodies are poisonous. A sting is not fatal, but can cause a painful reaction leading to nausea or even fainting.

Yet the problem started from admiration, not fear: Native from the Asian-Pacific waters, the lionfish was likely to be introduced into the Atlantic by aquarium owners from Florida, USA. They might have dumped them for frustration over seeing all their other fishes quickly devoured: In fact, a hungry pez léon can eat up to 30 times its stomach volume.

And in the wild, their unsatisfiable appetite can reduce juvenile fish populations on a reef by nearly 90% in as little as five weeks, says the Ocean Support Foundation.  Not surprisingly, the organization is dedicated to fighting what they see as a major threat to the Atlantic’s endangered marine ecosystem.

Policy-makers on all shores seem to agree, too. In 2014, Florida officially banned the importation of lionfish. A pointless gesture, argue some, given that the population has exploded already. It is unlikely that the trend can be fully reversed and lionfish ever be fully be eradicated from its new home, the National Oceanic and Atmospheric Administration is quoted. Yet different initiatives are trying to control numbers.

“EAT EM TO BEAT EM“, reads the print on the white T-Shirt. Indeed, in a beautiful twist to the debate about the “alien species”, the solution seems not to increase border control, but to spread love for the fish. With about 90% of global fish populations overfished, the ever-hungry human stomach could be just the lionfish’s natural enemy that conservationists have been waiting for.

“The lionfish is delicious”, say chefs such as Mexican Eduardo Palazuelos, who uses it in dishes such as ceviche, fish fingers or baked in a tempura. Large-scale fishing contests in the US and Latin America educate local fishers and divers about hunting techniques, and invite visitors to try their buttery, white flesh – while quickly rebranding the fish from the rather unsavoury “cockroach” to the much more enticing “Pirate of the Caribbean”.

And Mexico is on the forefront of this culinary trend: The tiny island of Cozumel produced 12 tons of lionfish fillet in less than two years from maybe six square miles of sea, reports say. For conservation purpose, these types of awareness campaigns seem quite effective. In one fishing “derby” alone, participants caught 1,400 of the fish, reducing local population of this invasive species by 60 percent.

Yet putting the “invasive” fish in the middle of the campaigns might overlook that the destructive impact of the lionfish strongly depends on its surrounding – the local ecosystem. And this can create problems.

Surprisingly, a recent study found the fish to be much less of a danger than suggested – meaning that Mexico might be different from other locations. By painstakingly analyzing the content of more than 8,000 fish stomachs, researchers found that the Pez Léon locally “consumes a wide diversity of species (…) in proportion to their abundance in the environment”. The majority of the fish, shrimps, crabs and lobsters it feeds were not on the list of endangered species. In other words: “The lionfish’s potential to cause the extirpation of its prey its low.”

The point is not to contest the huge impact that the lionfish has had on many marine locations. Neither it is to doubt that invasive species are a huge problem for Mexico. In fact, invasive species are believed to be responsible for around 60% of bird, mammal and reptile extinctions worldwide, and Mexico has not few of them: 210 species in total, including 106 types of animals, according to the Global Invasive Species Database.

The key question, however, is where to best allocate the scarce funds to protect Mexico’s unique biosystem. Many issues need to be addressed urgently. For example, the vaquita, a Mexican porpoise species, has become a dangerous step closer to extinction last year.

It is time to drop the “dichotomy of native-versus-alien species”, argues researcher Mark Davis who assembled a group of 18 other biologists behind him. Their essay in the Nature magazine is a manifest to abandon the “invader” rhetoric, but instead, to judge a species by its actual ecosystem impact. In this aspect, the debate is strangely reminiscent of the human immigration discourse: Some argued that the term “illegal immigrant” is biased and inaccurate, given that only acts and no person can be judged illegal. What lessons teaches the case of the lionfish? First, good policy decisions should not just be based on quick labels, but careful and calm research. And second, as humans, perhaps we should talk less about crossing national borders – and more about crossing ecological ones.