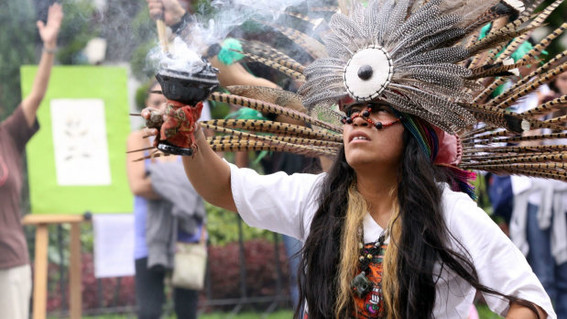 The new Mexican president, Andres Manuel Lopez Obrador has ‘hit the ground running,’ according to reports from the Associated Press.

Already setting a pace of progress and change in comparison to his predecessor, he promised to hold regular news conferences, as one of the many contributions he hopes will shake-up the Mexican governmental system.

As record numbers of viewers came out to watch the historic presidential inauguration over the weekend,  the 65-year-old also endorsed British opposition leader, Jeremy Corbyn, to become the next Prime Minister in the United Kingdom and took a commercial flight with civilians as he continues to try and sell the presidential plane.

There is certainly a change in the air and an element of hope that finally a break with PRI and PAN governments, who have controlled Mexican politics since the 1920s, will point to improvements in security, reductions in corruption and violence and more prosperity for the Latin American country.

In another first for presidential inaugurations in the country, AMLO also took part in a traditional cleansing and purification ceremony on Saturday, in a gathering which saw 68 representatives from the country’s indigenous and Afro-Mexican communities display their support from the new president.

The ceremony forms part of pledges by the new president to end the community’s ongoing poverty in the country.

According to El Economista, the new president received a ‘staff of command’ which represents the symbol of service and commitment towards the indigenous communities within the country.  What is signalled is the placement of trust in the new president and his support for the welfare of different communities in Mexico, according to a statement from Adelfo Regino Montes, the new head of the National Institute of Indigenous Peoples.

The ceremony involved flowers, music and the burning of copal which is a symbolic incense used by traditional communities within the country. Traditional healers stroked AMLO with herbs before blowing incense over him in a bid to entice good spirits and cleanse his forthcoming journey in leadership.

Mexico has one of the largest indigenous communities in Latin America and boasts over 50 spoken languages across the country. Nearly 14 percent of the country is considered indigenous and mainly come from the states of Oaxaca and Chiapas.

Although in the run-up to AMLO’s inauguration, the leader of the Zapatista movement came forward to express scepticism about the new president’s policies, AMLO has become the first Mexican president to take part in such a ceremony. It points to new hopes among the community that he will deliver on protecting this large group of people.

Another journalist found dead one day after presidential inauguration