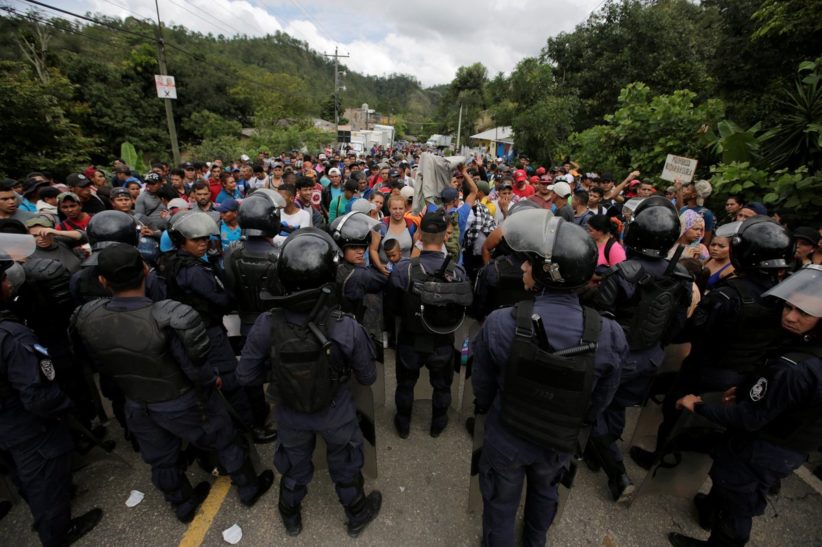 ‘‘The assault on our country at our Southern Border, including the Criminal elements and DRUGS pouring in, is far more important to me, as President, than Trade or the USMCA. Hopefully, Mexico will stop this onslaught at their Northern Border. All Democrats fault for weak laws!’’

Just three hours ago, the United States president unleashed his most recent viral onslaught in response to the migrant caravan heading to the country from Central America. Since yesterday the president has called the migrant movement an ‘assault’ and emphasised in capitals that the group, ‘INCLUDING MANY CRIMINALS’ came from Guatemala, Honduras and El Salvador.

Today, his Twitter tirade has also threatened to use military force to close the border with Mexico.

In the last few days, the march of migrants, referred to as the migrant caravan has steadily grown in size to as many as four thousand people, reports suggest.

Despite the president’s accusations, the reality is that many migrants are travelling with young children in escape of escalating gang violence across Central America which is causing unrelenting displacement of citizens.

The reason behind the progression for migrants from the Americas, despite increased pressure and threats from the United States, also relates to a plethora of violence, unemployment and desperation. Migrant trafficking routes continue to represent a lucrative and incredibly dangerous process, however, a number of Central Americans feel there is little choice than to undergo the trip. Amidst rising crime rates and plummeting economies that force people from their homes, further violence awaits migrants who jump onto moving trains and risk being captured by cartels such as the Zetas or even organ trade traffickers.

Unlike smuggling routes, however, the migrant caravan – and the scope of participants – is widely covered in the media and stands to represent Central America’s resistance and endurance despite the likelihood of not making it to the United States. The caravan will, at least, shed new light on the desperation of the situation.

According to reports, Guatemalan citizens are currently helping Hondurans who are making the long journey north since entering the country yesterday with food and water. The large movement of people continues to move through Guatemala and is believed to have splintered into two smaller caravans within the last 24 hours. As they approach Mexico however, it remains to be seen how Mexican authorities are set to handle the body of people.

In the past, Mexico has allowed safe passage through the country and granted month-long leniency before refugees face the risk of being deported. However, with President Enrique Peña Nieto set to meet U.S Secretary of State Mike Pompeo tomorrow, it is anticipated that migration will be high on the agenda and increased pressures will be placed on Mexico to curtail the migrant caravan.