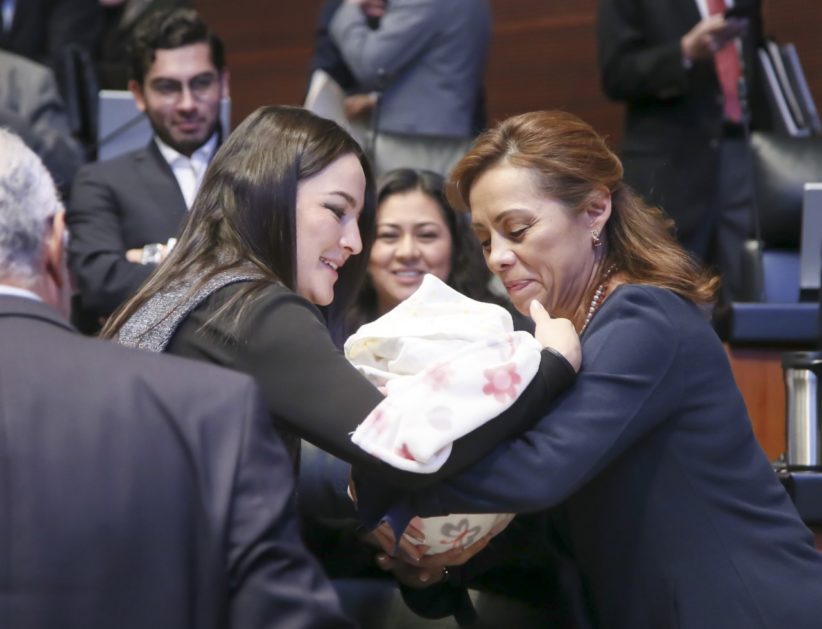 Senator of Aguascalientes for the National Action Party (PAN), Martha Marquez Alvarado, has defended her decision to bring her two-month-old baby daughter Emilia to the floor whilst taking part in the vote for the newly proposed National Guard on Tuesday.

According to eyewitnesses, the president of the Permanent Commission of Congress and one of AMLO’s most prominent politicians, Porfirio Munoz Ledo, made a misogynistic comment about carrying her baby to the podium to speak.

Whilst the Senator was speaking at the podium and requesting clarification of the shortage of gasoline in the country eyewitnesses can hear Munoz Ledo tell the Senator that “there is a limit of mother-child tolerance” and that she had exceeded her time in the gallery. In response, Marquez calmly asked the senior politician to respect her.

The PAN party has since demanded an apology from Munoz Ledo over the comment. In a recent interview with El Heraldo De Mexico, the mother has pointed out that no-one has approached her about the scenario apart from Patricia Mercado and Veronica Delgadillo, from Movimiento Ciudadano.

“We cannot allow the Permanent Commission’s board of directors to be used to mock and make misogynistic statements. We demand a public apology,” party representatives said.

After giving birth just two months ago, the mother of three decided to resume her work within a matter of weeks, telling media outlet, Verne, ‘‘I take my daughter to my job because I am a woman and because I am a mother.’’ As well as representing Aguascalientes, Marquez Alvarado is an active politician formerly working as a local deputy in the state and eventually becoming Secretary of the Health Commission, and a member of the Commissions of Development and Social Welfare, of Anti Corruption, Transparency and Citizen Participation, Rights of Children and Adolescents and of Youth and Sports.

At just two months old, Emilia has firmly made her mark on the Mexican Senate as well as attending Congress on previous occasions with her mother. Criticism of the Morena representative’s choice of words has since caused a stir throughout government and around the country, with many supporting the female politician.

Although Mexico has been recently celebrated for the amount of female representatives involved in the Mexican government making it one of the gender-equal in the world with 49 percent of the legislators in the Senate and 48 percent in the Chamber of Deputies, the country continues to struggle with traditional approaches to gender and difficulties for women.

A study last year revealed that despite positive reforms in the country,  Mexico remains in the lower half of 144 countries measured by the World Economic Forum in terms of gender equality.

What’s more, the term Femicide has been frequented a lot more in Mexico recently and specifically looks at the murder of women as a direct result of their gender. The results in Edomex (where Mexico City is located) was a gender alert which was launched in 2015 and remains in place as a warning of high aggression towards women as well as disappearances and murders.